Turning red! Melissa Joan Hart joked about watching a kissing scene with her husband, Mark Wilkerson, and one of their sons.

“I was covering my son’s eyes and my husband’s eyes,” the actress, 44, recently told Us Weekly exclusively while promoting her Heluva Good! partnership. “And I was like, ‘Don’t look, don’t look.’ My son’s like, ‘Why are you kissing a different guy?’” 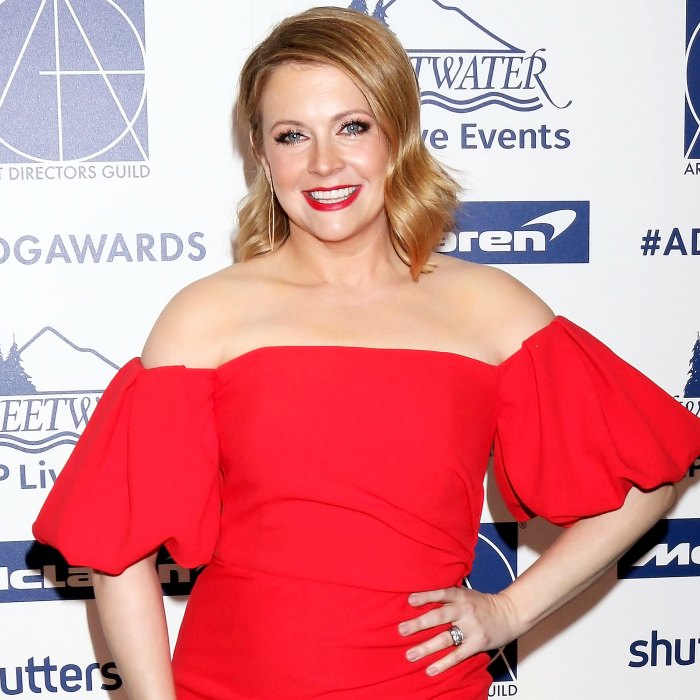 The New York native is the mother of sons Mason, 14, Braydon, 12, and Tucker, 8, and said that they’re “finally at an age where they understand it’s not real.”

That being said, watching their mom kiss Jason Priestley in Dear Christmas was still “awkward,” the Sabrina the Teenage Witch alum told Us. “It’s awkward when you’re doing it. That’s what I explained to them. It’s not fun. There was a little bit of me that was like, ‘My 16-year-old self would die, Jason,’ but like, on the other hand, my nephew was working the boom [on set]. And my sister-in-law is the wardrobe designer on the movie, and they’re coming in and fixing us and whatnot.”

The Clarissa Explains It All alum’s smooch with Priestley, 51, wasn’t actually supposed to happen, she added. Hart explained, “It was supposed to be [that] as we kissed, the camera drifts off, but we both felt comfortable enough with it. The director wanted it. And so we did it.”

In August 2014, she exclusively told Us that her little ones aren’t big fans of her old shows. “They’re not really into it yet, I’m trying. I think they were too young when I tried,” she explained at the time. “They do like watching Melissa & Joey, which is not really appropriate for them.”

The Melissa Explains It All author has been quarantining with her two kids and told Us that she has hidden away in her closet “numerous times” to be alone. Hart brings along her Heluva Good! dips for a snack break and gushed about the brand’s Holiday Hideout giveaway with entries available from December 8 through 17.