Mom approves! Victoria Beckham is a fan of her son Brooklyn Beckham‘s fiancée, Nicola Peltz — and she can’t wait to welcome her into the family.

The former Spice Girl member, 46, appeared on the Wednesday, December 9, episode of the British talk show Lorraine, where she marveled at how fast Brooklyn, 21, has grown up.

Victoria shares her eldest son with her husband, David Beckham. The pair are also the parents of sons Romeo, 18, and Cruz, 15, and daughter Harper, 9.

“Everybody remembers Brooklyn being little Brooklyn on the football pitch with David at Manchester United and now he’s a 21-year-old man,” she said.

Victoria added that her son and Peltz, 25, are “both so happy” as they prepare to walk down the aisle together.

“[Nicola] is just wonderful,” Victoria continued. “She’s sweet, she’s kind, she’s such a lovely, warm, wonderful, wonderful woman. We couldn’t have asked for Brooklyn to meet a more adorable, lovely lady. We are very happy. We love her. He’s so happy.”

The fashion designer also noted that the couple’s engagement was a positive moment for their family amid the coronavirus pandemic.

“It’s nice with everything that has gone on this year that Brooklyn has found his soulmate and the lady he wants to spend the rest of his life with, during this time there’s been so much uncertainty and that everything felt a little bit sad. So, we are very happy and very excited,” she said, adding, “What will I wear?”

Brooklyn and Peltz were first linked in October 2019 after they were spotted together at a Halloween party. The duo became Instagram official in January when they shared photos of each other on their accounts.

The model and Peltz announced their engagement via Instagram in July. “Two weeks ago I asked my soulmate to marry me and she said yes xx I am the luckiest man in the world. I promise to be the best husband and the best daddy one day I love you baby xx,” Brooklyn wrote at the time.

Victoria also shared the news in an Instagram post featuring Brooklyn and the Bates Motel alum. “The MOST exciting news!! We could not be happier that @brooklynbeckham and @nicolaannepeltz are getting married! Wishing you so much love and a lifetime of happiness We all love you both so much,” she wrote alongside the snapshot. 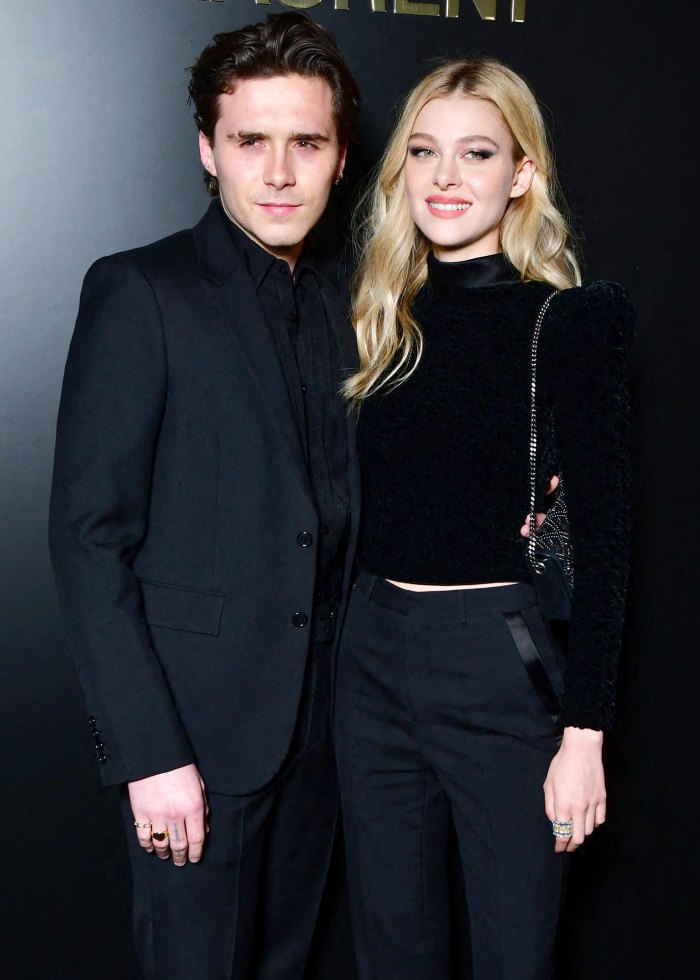 Peltz commented on her future mother-in-law’s post at the time, writing, “I love you so so much Victoria. I’m the luckiest girl.”

One month later, fans speculated that Brooklyn and Peltz had already tied the knot after the actress shared a pic of her fiancé wearing a gold wedding band via her Instagram Story.

Brooklyn previously dated Chloë Grace Moretz on and off from August 2014 to February 2018. Peltz, for her part, was in a relationship with Anwar Hadid from January 2017 to May 2018.