Meghan Markle spoke in a message to aid workers in a segment for CNN Heroes: An All-Star Tribute on Sunday, December 13, marking her first public appearance since revealing that she and Prince Harry had suffered a miscarriage.

Wearing a blush shirt with her hair pulled back, the Duchess of Sussex, 39, honored people working to feed those in need during the coronavirus pandemic.

“In a year that has been universally challenging for everyone, I’m inspired by the stories of compassion in our communities. Across the country, people have put their own needs aside to come together and support the collective well-being of those around them,” the former Suits star said in the little over two-minute-long segment that appeared to have been recorded in the garden of the couple’s Montecito, California, home.

“Back in March, the COVID-19 crisis hit hard, and overnight everything seemed to change,” said the mom of 19-month-old son Archie. “For many families, the impact of the pandemic has been catastrophic and far too many were faced with a heartbreaking question: How am I going to put food on the table for my family? But in the face of this devastating reality, we also saw the power of the human spirit and the remarkable ways that communities respond in challenging times. We saw the good in people, in our neighbors and in entire communities coming together to say they would not stand by while our neighbors went hungry.”

Meghan, The Duchess of Sussex honors the people working to feed those in need during the pandemic on CNN Heroes: An All-Star Tribute. Get Involved: https://t.co/MkgzSomt7H pic.twitter.com/jnPzPtmBGx

“We saw communities standing up and taking action. When kids’ lunch programs came to a halt, we saw our neighbors make sure that those children received the nutrition they need. And when those who are immunocompromised or most vulnerable couldn’t leave their homes, we, as a community, showed up to deliver the food they needed to their doorsteps,” said Meghan, who along with Harry, 36, delivered meals to the needy in L.A. earlier this year. “We know the value of food. As nourishment, as a life source, and in the moments of crisis, the warmth of a meal can feel as comforting as a much-needed hug — especially in the absence of human contact due to the social distancing we’re all experiencing.”

“These moments reminded so many that they’re cared for,” she concluded. “Tonight, we are celebrating these quiet heroes, some of whom I know and others that we applaud from afar. These individuals stood up and made sure the most basic needs of our communities were met. They made sure those around them did not have to suffer in isolation. They nourished their neighbors in more ways than one. And they showed us, all of us, that even in the darkest times, when we come together, we have the power to remind someone else that there is hope, and that we will be OK.”

Her speech on Sunday marked Meghan’s first official appearance since revealing in an emotional New York Times op-ed last month that she and Prince Harry suffered a devastating miscarriage in July. 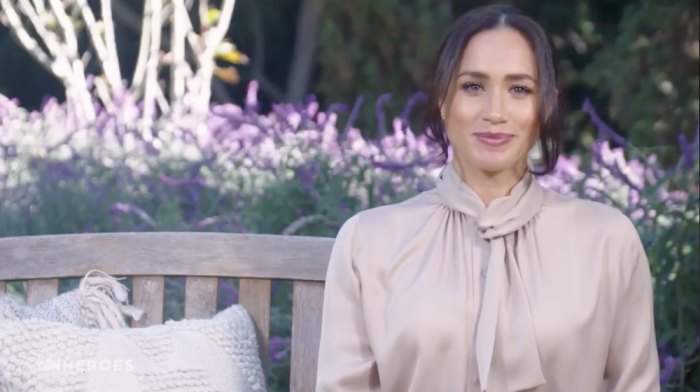 While some criticized her for opening up about something so private, a source exclusively told Us Weekly earlier this month that the California native “has no regrets whatsoever about sharing her grief.”

“Meghan is overwhelmed by the outpouring of love and support she’s received from the public and other women who’ve experienced the pain of losing a child,” the insider added.

The couple received many kind messages over social media and the source told Us that Harry’s family, including brother Prince William, father Prince Charles and grandmother Queen Elizabeth II have privately “reached out” to the couple.

“Harry confided in them over the summer, when it happened,” the insider revealed. “Despite the fact the brothers have grown apart, William hates the idea of Harry suffering. He really feels [for] him.”