A heartbreaking loss. Chrissy Teigen revealed that her family is mourning the death of their pet hamster, Peanut Butter.

The Cravings author, 35, shared the upsetting news via Twitter on Tuesday, December 8. “Oh. Peanut Butter the hamster died,” she tweeted.

Teigen then explained how her family is coping while responding to a fan who expressed how “sorry” they were for her daughter, Luna, whose nickname is “Toons.” “She is okay,” the Sports Illustrated model replied. “We are very open about life and death in the house and it was all good teachable moments, especially since she still asks about [the] baby [we lost] and stuff 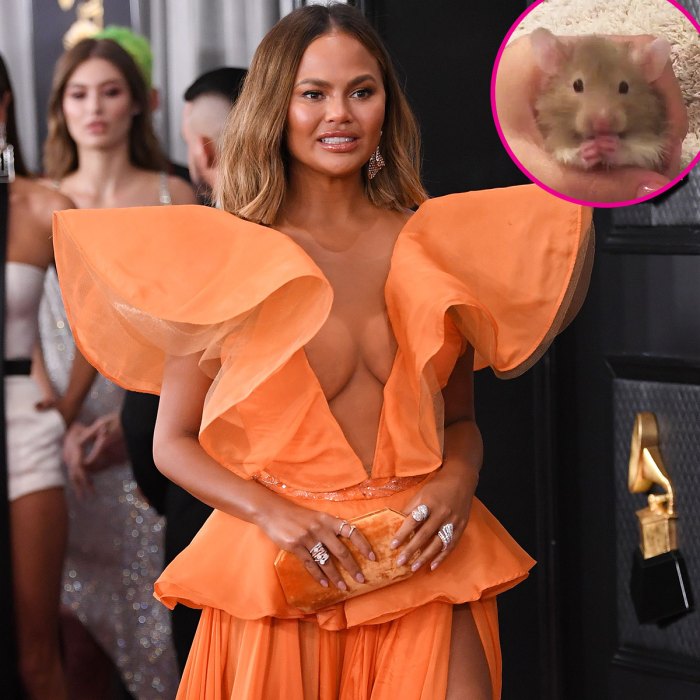 The businesswoman revealed that they have already welcomed a new hamster into their home. Sharing a video of a row of Christmas stockings, she zoomed in to show one that was dedicated to “New P Butter.” “That is the name, don’t attack me!” she added.

When a fan questioned how Teigen was able to get a stocking made for New P. Butter so quickly, she said, “[Peanut Butter] died a couple weeks ago. But I def also could have planned to just have it. I mean he is a hamster.”

The Lip Sync Battle cohost shares a large brood of pets with her husband, John Legend, and their children, Luna, 4, and Miles, 2. In addition to New P. Butter, they own multiple dogs, two birds and a bearded dragon.

Peanut Butter is not the first pet they have lost. Teigen previously mourned the loss of her “firstborn,” a dog named Puddy, in March 2018.

“He was there for everything. Every time I needed a taste tester, someone to kiss or needed to sob into his stinky rolls, he was there,” she wrote at the time in an emotional Instagram tribute. “It’s true what they say. We are their entire lives and it is the greatest shame that they can only bless us with a short spark of time in ours.”

Not long before Peanut Butter’s passing, the Utah native suffered a pregnancy loss in September due to placenta abruption. In an essay for Medium, she explained the moments leading up to her son, Jack, being born too prematurely and how she coped.

“People say an experience like this creates a hole in your heart,” she wrote in October. “A hole was certainly made, but it was filled with the love of something I loved so much. It doesn’t feel empty, this space. It feels full.”

During a Good Morning America appearance that following month, Teigen credited her young children for helping her to heal, saying, “[They bring] so much joy, every single day and so much adventure every day. You don’t want to be stuck in bed when you hear the laughter downstairs. It helps so much.”