A bittersweet ending? Chris Harrison teased the conclusion of Tayshia Adams‘ Bachelorette journey — and there could be more tears than she bargained for.

“You see that in the previews she’s in the dress and there’s a couple of close calls,” the Bachelorette host, 49, exclusively told Us Weekly while promoting season 25 of The Bachelor. “Look, she is falling in love. These men are in love, but are they all willing to go where she wants this to go? Are they willing to take that last step? And maybe those previews show you, it’s not gonna end well.” 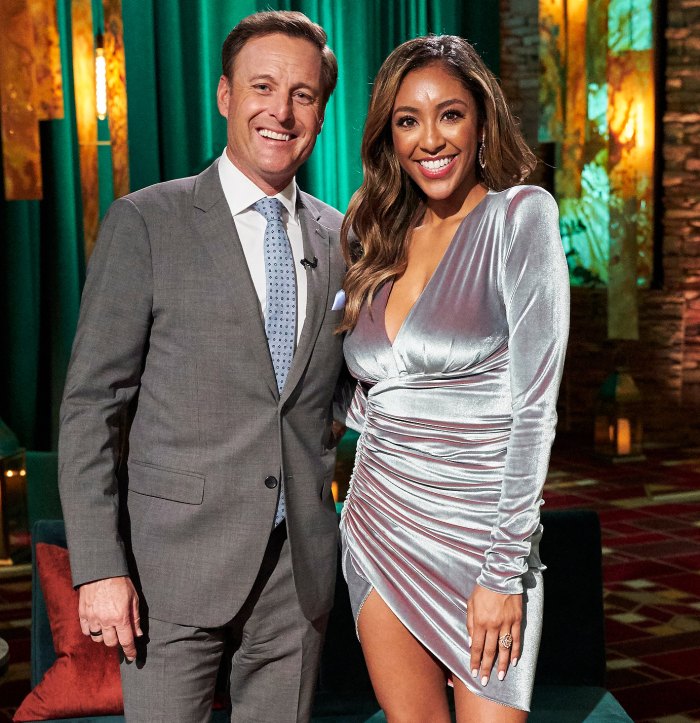 As for which Bachelorette contestant Harrison is rooting for to receive the final rose, the ABC personality couldn’t pick just one.

“In my mind, I don’t think you can go wrong,” he said. “These guys, whether it’s Ivan [Hall], Riley [Christian], Brendan [Morais], Zac [Clark], Ben [Smith], these are good dudes. These are really good guys. And I even told Tayshia towards the end, I said, ‘You can’t make a wrong decision. You just need to make the right decision for you, who fits in your life, where do you see your life going?’ And this is where it starts to align. When you have those long conversations, ‘Do you want to get married? Where are we going to live?’”

Harrison added that at this stage in the competition, being in love is the easy part.

“It’s really splitting hairs at this point,” he said. “No longer will she run into a situation where there are guys that are there for the wrong reasons. Now it’s ‘Everybody’s in, everybody’s in love.’ Who fits? And are they willing to go all the way? Is she going to get the proposal that she wants? That’s the big question.”

Adams, 30, hinted at the potential winner during her Wednesday, December 9, appearance on The Ellen DeGeneres Show. When the former phlebotomist was asked which man was “husband material,” she replied, “I feel like all of them, but probably Zac.”

Host Ellen DeGeneres continued to question her, asking, “So, you end up with Zac?” However, the Bachelor in Paradise alum kept her lips sealed about the show’s outcome.

The Emmy winner, 62, also asked Adams about the large diamond ring that she was recently spotted wearing.

“All I have to say is I’m just a girl … if I want to drink my coffee with some diamonds on, I can do that,” the Bachelorette star joked. “I like to wear diamonds all the time!”

However, Adams hinted that she finally did get her fairy-tale ending. “I’m a happy girl,” she told DeGeneres. “I’m really blessed.”