Zach Braff: 25 Things You Don’t Know About Me!

In the early aughts, fans grew to know and love Zach Braff for his character, J.D., in the medical comedy Scrubs. But did you know that the actor, 45, had to audition six times for the beloved role before finally landing the job? The star of the upcoming film The Comeback Trail shared 25 things you might not know about him exclusively with Us Weekly. Read on to learn more fun facts about Braff.

2. I was the voice of the Cottonelle [commercial] puppy.

3. My first [acting] job was [in] a pilot about a high school for CBS when I was 14. My costar was Gwyneth Paltrow.

4. Everyone in Hollywood passed on my script for [2004’s] Garden State. Eventually I met Quicken Loans cofounder Gary Gilbert who paid for [it].

5. Paul Simon, [who was featured on the film’s soundtrack], started playing “The Only Living Boy in New York” at his concerts again after Garden State’s success.

6. I auditioned six times for Scrubs.

7. Lauryn Hill was at my bar mitzvah. We would regularly commute from our high school in New Jersey into New York City for auditions.

8. I [was a production assistant] on music videos after I graduated from Northwestern University.

9. I photobombed a couple having their wedding portrait taken in Times Square.

10. The next day, it had gone so viral that the picture was on the screen in the back of the cab [I was sitting in].

11. I was at the White House the night Lin-Manuel Miranda first rapped the opening of Hamilton to President Obama. You could say I was “in the room where it happened.”

12. I used to joke that I could only cook ice. My girlfriend, [Florence Pugh], is a serious chef, so now I know how to cook baked salmon and ice.

14. Director Sam Raimi wanted me to be able to improv with the cast, so I was often in a blue-screen onesie operating a monkey puppet.

15. Apparently I’m related to Mitt Romney through Rebecca Nurse, a woman executed at the Salem Witch Trials. Google it.

16. I directed Gavin DeGraw’s music video for “Chariot.” It was the most stressful day of filmmaking I’ve ever had, but it came out great. 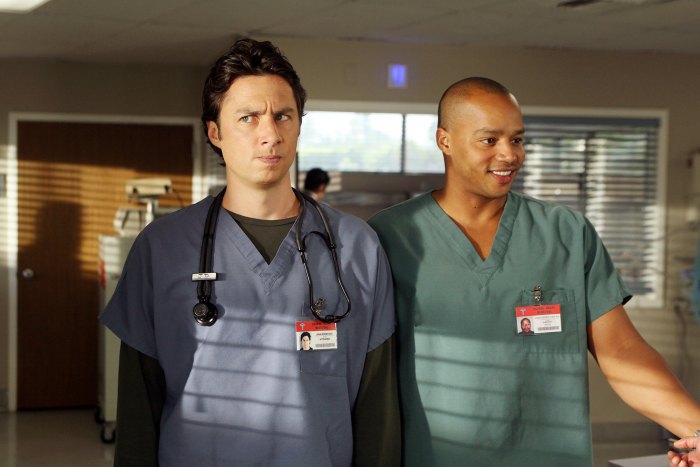 18. I do a podcast with my best friend [and former Scrubs costar], Donald Faison, called “Fake Doctors, Real Friends.”

19. Three out of the five professional plays I’ve [starred] in have been Shakespeare.

20. I was a waiter at a restaurant called Le Colonial when I first moved to L.A.

22. I was in an episode of The Baby-Sitters Club entitled “Dawn Saves the Trees.”

24. As a result, my outgoing [voice] message is him saying: “Hello, this is Morgan Freeman. Zach can’t come to the phone. Please leave a message.”

The Comeback Trail will be out in early 2021.

Read More: Zach Braff: 25 Things You Don’t Know About Me!