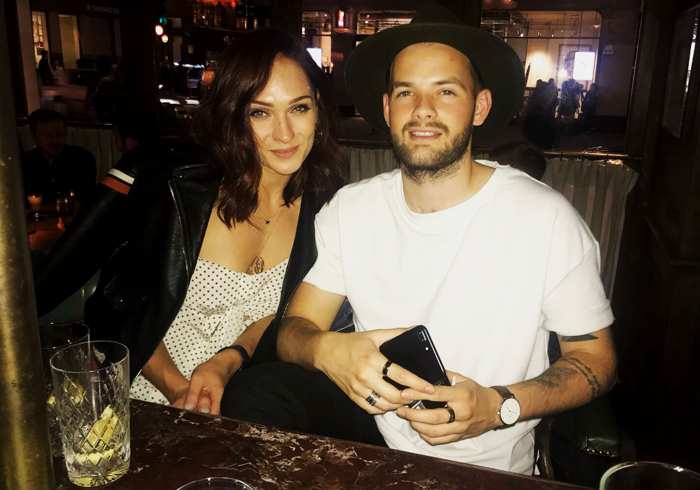 A devastating day. X-Factor alum Tom Mann confirmed that his fiancée, Dani Hampson, died on what would have been their wedding day.

“I can’t believe I am writing these words but my darling Dani – my best friend, my everything and more, the love of my life – passed away in the early hours of Saturday morning, 18th June,” the songwriter, 28, wrote via Instagram on Monday, June 20, alongside a photo of his late partner holding their son, Bowie. “What was supposed to be the happiest day of our lives ended in irreversible heartbreak. I feel like I have cried an ocean.”

Mann continued: “We never made it to the alter [sic]; or got to say our vows, or dance our first dance, but I know you know that you were my entire world and the best thing that has ever happened to me, Danielle. I will wear this ring that I was always supposed to wear as a sign of my unconditional love to you.”

Hampson, 34, had no apparent health issues and the cause of her death has not been publicly revealed. The publicist and Mann, who were forced to postpone their September 2020 wedding due to the coronavirus pandemic, welcomed Bowie in October 2021.

In his post, the former Stereo Kicks member wrote that while he was “completely broken” by the loss of Hampson, he was using “any strength I can muster” in order to be there for the infant. “I will not be a mark on the parent that you had already become but I promise I will do my everything to raise Bowie just the way we always wanted,” Mann wrote. “I promise you he will know how amazing his mummy was. I promise to make you so so proud.”

Describing Hampson as “the most beautiful person inside and out” and “the most incredible soul,” Mann concluded his post with a candid confession that he would be grieving “for a very, very long time.” He continued, “My darling Dani, the brightest light in any room, my world is nothing but darkness without you. I will miss you forever.”

Mann originally auditioned for the X-Factor in 2013 before returning the following year. He and four other contestants on the UK talent show were placed into a boy band and they ultimately finished in fifth place. After Stereo Kicks disbanded in July 2015, Mann released music as a solo artist and worked as a songwriter and producer for artists including Rita Ora and Lewis Capaldi.

Hampson frequently shared her support for her fiancé’s career on social media. In April, she commemorated Bowie turning 6 months old with a clip of Mann serenading the little one with Elton John‘s songs “Cold Heart” and “Rocket Man.”

“Happy 6 months my darling boy,” she wrote via Instagram at the time. “I played this song almost every day of my 3rd trimester, it was in my labour playlist & it was number 1 the day Bowie was born… determined for it to be ‘our song’ & for it always remind us of life’s good bits.”