Model in the making? Kim Kardashian’s daughter Chicago is looking more like her aunt Kendall Jenner every day — and already serves similar looks!

The Skims founder, 41, reposted a side-by-side photo of Chicago, 4, and Jenner, 26, on Sunday, July 24, confirming that her daughter is slowly becoming her sister’s twin. The picture — which was originally posted by the KimKardashSassy fan page — revealed just how similar the niece and aunt are these days.

Chicago, who is the third child of Kardashian and ex-husband Kanye West, starred into the camera in the snap. (The exes also share daughter North, 9, and sons Saint, 6, and Psalm, 3.) 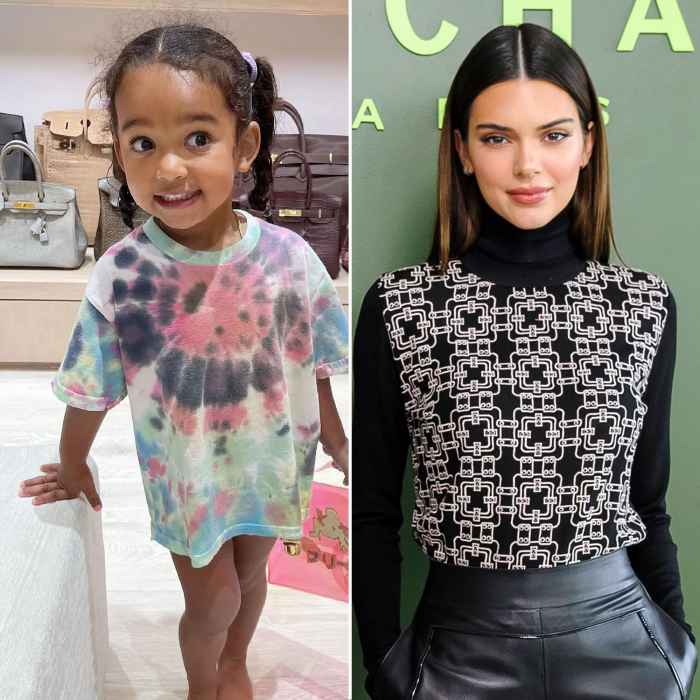 The little one’s pouted lips, full eyebrows and pointed chin are all signature features that Jenner possesses. Chicago even nailed the model’s intense eye contact in the photo.

This isn’t the first time that Chicago has been compared to her famous aunt. In December 2021, fans pointed out that Kardashian’s third child was the spitting image of Jenner as she struck multiple model poses in their annual Christmas card outtakes.

“Chicago is coming for auntie Kendall’s job,” one fan wrote at the time on the Selfish author’s post. A second Instagram user added, “Chicago is a natural! Watch out Kendall!”

Celebrities Bonding With Their Nieces and Nephews: Pics Read article

The 818 Tequila founder, who is the only one of the Kardashian-Jenner siblings without kids, has been vocal over the years about being happy as just an aunt for now.

“I have moments when I’m like, ‘Do I have baby fever? Do I want a baby right now?’ But I don’t, I don’t,” Jenner told Ellen DeGeneres in March 2018. “I can wait for a little while longer, but it’s awesome because I have all these little babies to play with. So I can play with them and then just give them back. They’re all really cute.”

Jenner became an aunt in 2009 at the age of 14 when eldest sister, Kourtney Kardashian, welcomed son Mason. (The Poosh founder, 43, and then-boyfriend Scott Disick later added to their brood with Penelope and Reign in 2012 and 2014, respectively.)

The Rebels: City of Indra coauthor’s other sisters, Kim, Khloé Kardashian and Kylie Jenner, have also become mothers in recent years. Khloé, 38, welcomed daughter True in April 2018 with then-boyfriend Tristan Thompson. Although the duo parted ways in 2021, Us Weekly confirmed in July that they are expecting their second child via surrogate.

Kylie, for her part, gave birth to daughter Stormi in February 2018. The 24-year-old makeup mogul and Travis Scott went on to welcome their second baby, a son, in February of this year.

Despite pressure from her mom, Kris Jenner, to have children sooner rather than later, Kendall has remained vocal about wanting to wait.

“You keep telling me, ‘You’re not getting any younger.’ But guess what? It’s my life,” the Kendall + Kylie designer, who dated Devin Booker for two years before splitting in June, told the 66-year-old momager on a May episode of The Kardashians. “I don’t know if I’m ready yet.”

She added: “I still have a lot to figure out before I can, like, welcome a child into my life. I’m still, like, enjoying life on my own. And I’m OK with that right now.”