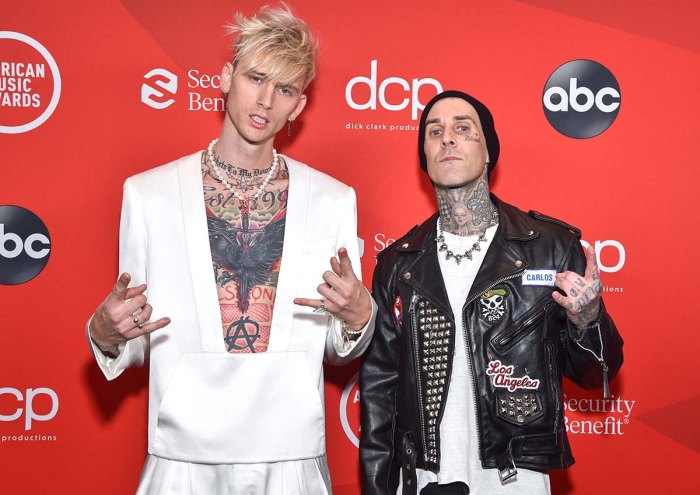 Not slowing down! Despite his recent health challenges, Travis Barker is proving that the show must go on.

“Against his doctor’s orders AND with a broken thumb, I convinced @travisbarker to come join us for the last couple days,” Machine Gun Kelly captioned a Tuesday, August 9, Instagram Story snap with Barker, 46, on FaceTime.

The “Bloody Valentine” rapper, 32, kicked off his Mainstream Sellout tour earlier this summer, and the Blink-182 drummer has made a few cameos along the way. Ahead of the rapper’s last few city stops, he enlisted his BFF to help wrap up the tour in style. 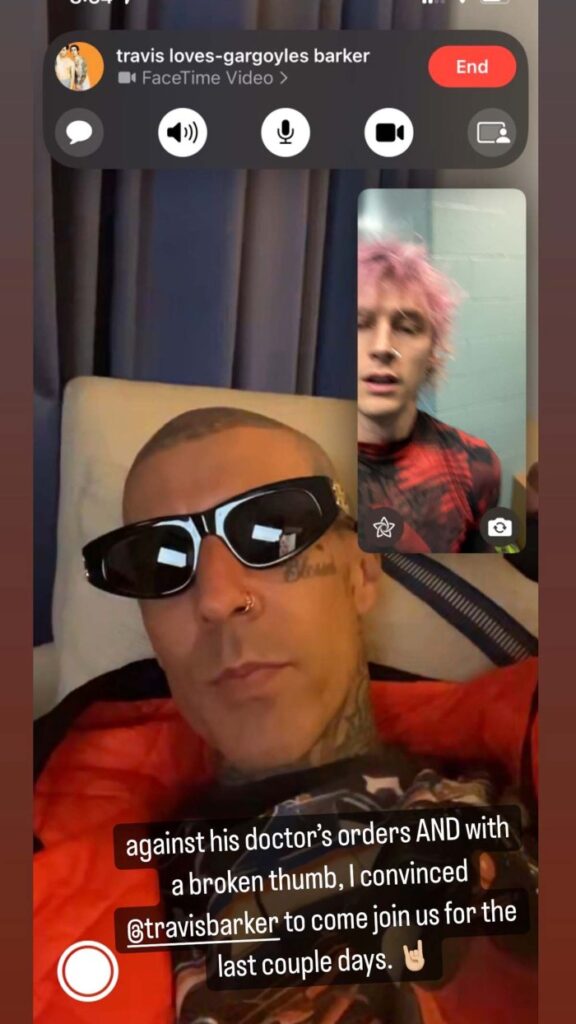 “Put a middle finger up if you’ll play LOVE RACE with us tonight,” the Good Mourning star captioned a second Story pic of Barker on Tuesday holding up one finger. “[It] looks like a middle finger.”

The Barker Wellness founder has not further addressed his broken thumb or his doctor’s recommendations. In June, he was hospitalized for pancreatitis.

“I went in for an endoscopy Monday feeling great,” Barker wrote in an Instagram Story statement last month after being discharged from receiving medical attention. “But, after dinner, I developed excruciating pain and have been hospitalized ever since. During the endoscopy, I had a very small polyp removed right in a very sensitive area, usually handled by specialists, which unfortunately damaged a critical pancreatic drainage tube. This resulted in severe, life-threatening pancreatitis.”

He added at the time: “I am so very, very grateful that with intensive treatment I am currently much better.”

The “All the Small Things” musician was supported by wife Kourtney Kardashian — whom he wed in Italy in May following two unofficial ceremonies — throughout his hospital stay.

“Kourtney and Travis are stronger than ever, especially after his health scare,” a source exclusively told Us Weekly in July after Barker returned home from the medical facility. “They’re truly enjoying this new newlywed phase. [Travis] is focused on his health and couldn’t have anyone better by his side [than Kourtney].”

Following his health scare, Barker accompanied the Dirt star on the drums during his July 13 Mainstream Sellout show in Los Angeles.

“There’s a person I grew up idolizing that I became friends with and he believed in me. And never more have I wanted to jam to a song that he and I created. L.A.’s own Travis Barker, make some noise for him tonight,” Kelly reportedly told the crowd of his longtime collaborator, per Page Six. “You know a fun fact is that Travis is not supposed to be playing drums right now but guess what he’s doing here? Playing drums right now! Trav, I know we agreed to one song but I would be remised if I did not ask you to play ‘one more song.’”