Crossover alert! Mike Baxter may need some help around the house in the final season of Last Man Standing — and he’s found the perfect person. In a promo released on Friday, December 4, Mike is introduced to a new character.

“Tim Taylor, they call me the toolman,” says a fully gray Tim Allen wearing a Binford Tools T-shirt, reprising his role from Home Improvement. He then does his famous grunting noise, in which Mike admits is “a little annoying.” 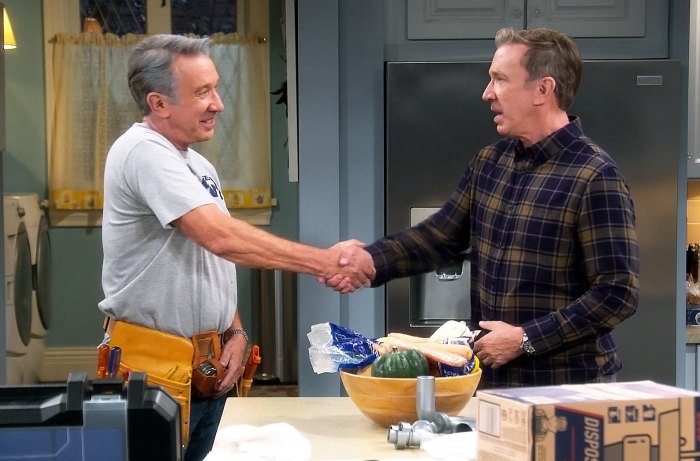 Allen, 67, famously portrayed Tim “The Toolman” Taylor in Home Improvement, which aired from 1991 to 1999. Over the years, Jonathan Taylor Thomas and Patricia Richardson — who played the comedian’s son and wife, respectively, on Home Improvement — have made cameos on the Fox sitcom, so it’s no surprise that Allen brought back one more nod to the hit.

Which TV Shows Are Renewed and Which Are Canceled? Your 2020-2021 Guide Read article

“I can’t say, because some of this is in negotiation, but I always love stunt casting,” the Golden Globe winner told Us Weekly exclusively last January about whether any of his former costars would appear again. “There’s a whole bunch of people we’ve reached out to. So yes, that’s always fun. When it’s kind of relevant, we will do that!”

In the new promo, he also honored another very famous movie he was a part of: The Santa Clause. During quarantine, Mike’s beard has grown very long. “I won’t shave until we get through this,” he declares. As he sits in his office stroking his facial hair, he states, “I could play Santa Claus.”

Woke up this morning and noticed a bit more stubble. This always happens to me as I transition to you no who this Christmas. pic.twitter.com/MAXNIbZs9f

Of course, Allen famously portrayed St. Nick in the 1994 holiday hit film. He shared a selfie rocking the beard last month. “Woke up this morning and noticed a bit more stubble,” he tweeted at the time. “This always happens to me as I transition to you know who this Christmas.”