Too Cute for Words! Nev Schulman Looks Back on His Sweetest Family Moments

A family affair! Nev Schulman has the cutest family — and he took a moment to relive some of their sweetest moments together when he joined Us Weekly to play “I Can Explain.”

During the game, the 36-year-old Catfish host began by reflecting on a cute Instagram selfie he took with his wife, Laura Perlongo. At the time, he noted that the couple were “club-in’ in da house” as he held onto a glass of wine.

“Laura and I were actually at my aunt’s house for a little family get together, and I just sort of pulled her over and said, ‘Let’s take a picture like we’re out at the club,’” he recalled while promoting Dancing With the Stars. “Of course we weren’t, but … you forget the little things, like, when we go out and we’re having a great time and we want to send a picture to our friends or post something. It’s something we always just do but hadn’t done that in seven or eight months.”

Next up, Schulman opened up about a photo that was taken on the duo’s third wedding anniversary in July. The twosome posed for a silly selfie in bed with their 3-year-old daughter, Cleo, and 20-month-old son, Beau. In the sweet pic’s caption, Schulman joked that it felt like their “billionth anniversary” together. 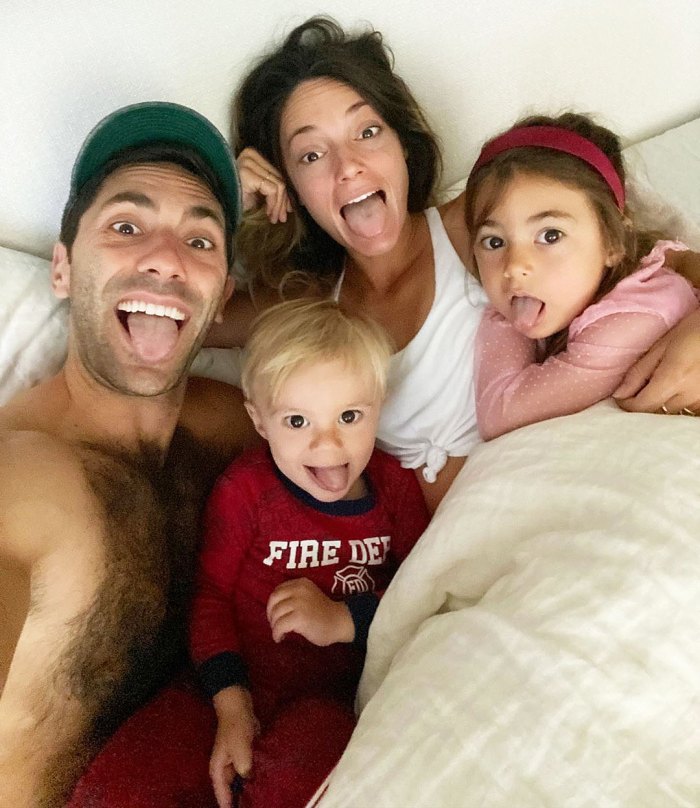 While describing the pic, the MTV personality star told Us that he enjoys having simple moments like that with their children. “It’s just so fun when the kids come into the bed in the morning,” he shared. “They’re at the perfect age right now where we can be super silly and snugly. So, we were just having fun hanging out.”

Schulman added, “Right now, Beau and I have a thing where we stick our tongues out at each other. So, we were doing it and then [my wife and daughter] wanted to get in on it.”

For the last family shot, he talked about a throwback photo from the 35-year-old writer’s pregnancy with Beau. The pic featured Perlongo’s baby bump covered in stickers as Cleo was in the background. Schulman revealed that his eldest child “felt like she wanted to decorate the baby” and she ultimately “covered Laura’s belly in her stickers,” which he thought was “so cute.”

Aside from gushing about his adorable family, Schulman opened up about joining Dancing With the Stars in its 29th season. The TV producer, who is paired with Jenna Johnson, explained to Us why he chose to donate the money he earns from the competition series to the American Cancer Society, the New York City Ballet Dancer Relief Fund and the National Dance Institute.

“Those are the three organizations that have changed my life in such a big way,” he explained to Us. “I’m thrilled that I can shed some light on them and, obviously, also make some additional contributions to the ones that I already made.”

Read More: Too Cute for Words! Nev Schulman Looks Back on His Sweetest Family Moments