Tom Bergeron, Erin Andrews Joke About Why They Were Fired From ‘DWTS’

Still a team! Tom Bergeron and Erin Andrews rallied together after Dancing With the Stars producer Andrew Llinares revealed why the show decided to move in a new direction with its host this season.

On Wednesday, September 30, the executive producer claimed that the longtime ABC reality program needed to “evolve” after 15 years on the air. Bergeron, 65, had assumed the role of host during the show’s first season in 2005 and was joined by Andrews, 42, nine years later. In July, the network announced that Tyra Banks would be taking over for season 29, which debuted two months later. 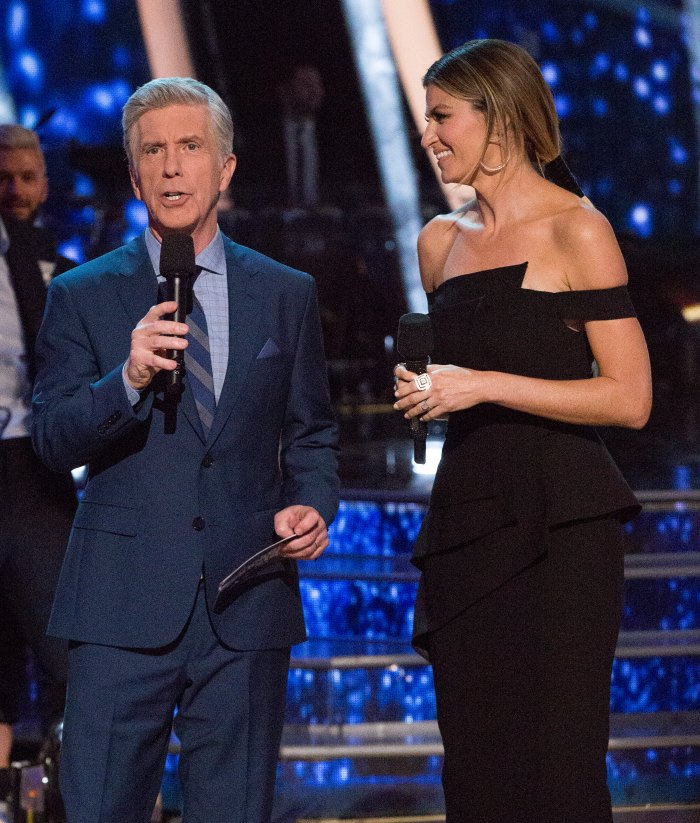 “I think it’s all about evolution,” Llinares said during ABC’s VirtuFall panel on Wednesday. “I think changing the host was all about evolution, it was about making the show feel fresh, making it feel new [and] kind of make it reach out — maybe to a new audience as well, as well as the audience that’s been there for years. … I think there’s a real danger when a show’s been on for a long time that the audience almost gets bored of the rhythm.”

Hours later, Bergeron and Andrews reacted to the producer’s opinion with a laugh. “SEE @ErinAndrews, I TOLD you we shouldn’t have sabotaged the spray tanner!!” the former America’s Funniest Home Videos personality tweeted alongside a screenshot of a headline from the press event.

“UGGGGHHH @Tom_Bergeron! I’m the one that WARNED you that the sequins weren’t shiny enough,” Andrews, who competed on season 10 of DWTS before scoring her cohosting gig, replied.

Fans and other members of the DWTS world were shocked by the network’s choice to axe its long-running hosting team. After stepping up to the plate, Banks, 46, told Us Weekly exclusively that it would be a “challenge” to fill Bergeron and Andrews’ shoes in the ballroom.

“I mean, you know, Tom Bergeron and Erin. They lead the show, this is one of the top-rated shows in the world,” she said in September. “So [I’m] respecting the stage that they have set and then adding my icing to that. I feel confident about that, but of course, it’s a challenge, but I don’t back away from challenges.”

Tyra Banks’ Hosting Duties Through the Years: From ‘ANTM’ to ‘DWTS’ Read article

While ABC raised its viewers’ eyebrows with the decision to replace the former cohosts, Bergeron and the sideline reporter were equally as taken aback. During a September episode of the “Token CEO” podcast, Andrews admitted that it was a “super big bummer” to learn that she’d been let go.

“I didn’t have much time to deal with it. I got a phone call — we were on the putting green with my dog and my husband — and I got a call that said, ‘You know, so-and-so from ABC wants to talk to you,’ and I was like, ‘Oh, s–t,’ like, this is it,” she recalled. “I felt sorry for myself, and I kind of was like, ‘This is a terrible time to lose my job,’ because we don’t know when live television is coming back. These are hard jobs to get.”

Read More: Tom Bergeron, Erin Andrews Joke About Why They Were Fired From ‘DWTS’