The hills are (still) alive! Nearly 57 years after The Sound of Music premiered, the cast has reunited in Julie Andrews’ honor.

Julie Andrews Through the Years: From ‘Sound of Music’ to ‘Bridgerton’ Read article

The Bridgerton narrator, 86, received the AFI Life Achievement Award at the Thursday, June 9, gala thrown by the American Film Institute. To celebrate her legacy, five of her Sound of Music costars — who portrayed several of the von Trapp siblings — posed alongside Andrews on the red carpet. 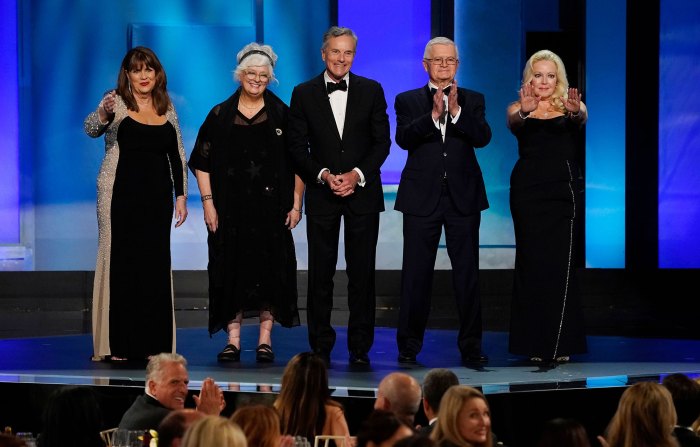 The televised tribute to Andrews’ impressive career — which airs later this month on TNT — saw a star-studded crowd including Carol Burnett, Steve Carell, The Princess Diaries’ Hector Elizondo and Blake Shelton come together to celebrate her legacy.

“This night reminds me with great clarity how many people are involved with making movies,” the Mary Poppins actress said in a statement earlier this month. “What a huge collaborative effort it takes to bring film to the screen. My [late] husband Blake [Edwards] never liked when people referred to filmmaking as the business or an industry. He insisted that film was an art form and should always be called that. And I know that is exactly the way the AFI feels also.”

While Andrews’ career has spanned decades, her role of Maria in 1965’s The Sound of Music gained her an Academy Award nomination and eventual win. The film — inspired by the true story of the von Trapp family singers — focuses on young nun Maria (Andrews) who leaves her Austrian abbey to become the governess to a widowed military officer’s (Christopher Plummer) seven children. As she becomes fond of the little ones, she also brings a new lightness and musical spirit into the household.

“Well, I never knock it,” she previously told Vanity Fair in March 2015 of her nun-turned-baroness character. “Because it was the moment in my career where everything exploded. That and Poppins. … [Christopher] was such a hugely great actor that when he was cast in Sound of Music all I could think was, ‘How will I ever live up to that?’ But we had a very good time. We never had a cross word, nothing.”

Plummer, who portrayed Maria’s love interest Captain von Trapp in the film, died in February 2021 at the age of 91. Andrews, for her part, emotionally remembered her former costar at the time.

‘The Princess Diaries’ Cast: Where Are They Now? Read article

“The world has lost a consummate actor today,” the Princess Diaries actress told Us Weekly in a statement. “I treasure the memories of our work together and all the humor and fun we shared through the years. My heart and condolences go out to his lovely wife Elaine [Taylor], and his daughter Amanda.”

The 48th AFI Life Achievement Award: A Tribute to Julie Andrews airs on TNT on Thursday, June 16, at 10 p.m. ET.