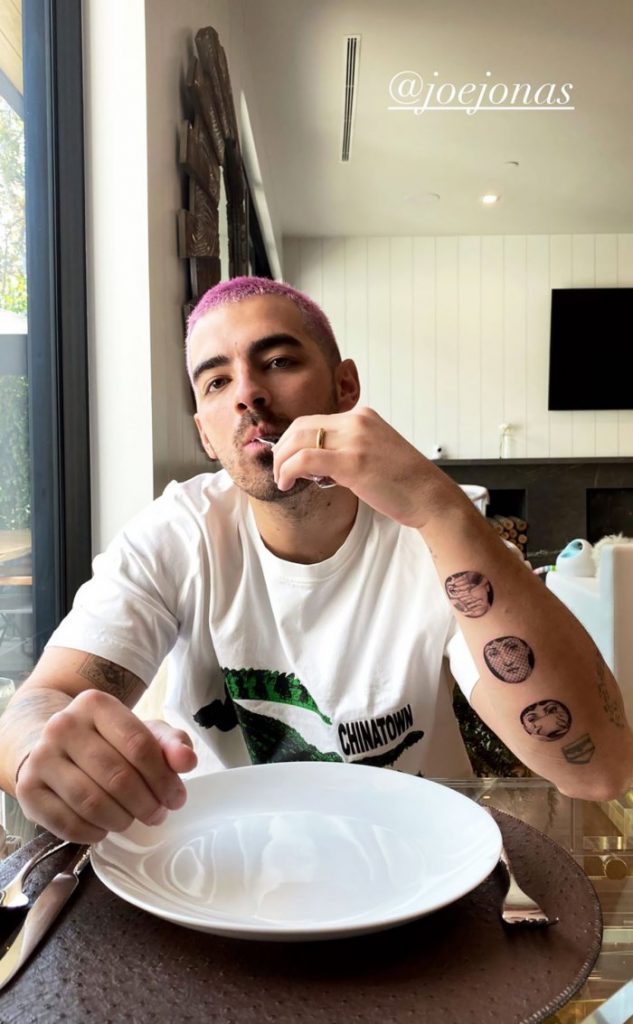 On Monday, October 5, Sophie Turner shared a photo via her Instagram Story of her 31-year-old husband sporting three new distinct tats down the outside of his forearm. The three circular designs represent, “See no evil, hear no evil, speak no evil.”

These are just the latest of Jonas’ many tattoos. In fact, he and Turner, 24, even have matching tats in honor of their late dog, Waldo. After the Alaskan Klee Kai was hit by a car in a “freak accident” back in July 2019, the couple went to Bang Bang tattoo artist Dragon to get a beautiful and realistic portrait of the pup on their forearms. Other standout designs of his include a stamp with his grandpa’s face on it, a knot of ropes on his right forearm and the number 15 on the inside of his ring finger.

Jonas’ “see no evil, hear no evil, speak no evil” designs aren’t the only new part of his look, though. After going platinum blonde back in August, on Saturday, October 3, he debuted bright pink strands in honor of Breast Cancer Awareness Month. It’s a bold move, but, no surprise here, he makes it work!

In July, the performer welcomed his first child with Turner. “Sophie Turner and Joe Jonas are delighted to announce the birth of their baby,” the couple told Us Weekly in a statement at the time. They decided to name their daughter Willa after picking it out long before her arrival.

“Willa isn’t a family name and isn’t short for anything,” a source told Us at the time. “[It] is a name they had picked out a while ago before the baby’s arrival.” Fingers crossed we soon get to see a chic couples tat in honor of their first born.