Surprise Performance! Wynonna Judd Sings ‘Why Not Me’ in Honor of Mom Naomi

A surprise tribute. As country singer Carly Pearce took the stage at Nashville’s annual CMA Fest, she enlisted Wynonna Judd to sing an unexpected duet to honor the legacy of the late Naomi Judd.

Honoring a Legend: Everything to Know About The Judds’ Final Tour Read article

“CMA Fest, we lost one of our absolute pillars in country music earlier this year: Miss Naomi Judd,” the “Every Little Thing” songstress, 32, told the crowd on Saturday, June 11, per The Tennesseean. “As a girl growing up in Kentucky, I idolized the Judds and wanted to be like them. My first concert was to see Wynonna. And I’ve always loved all of the music that The Judds made and feel like it is such a representation of the best in country music. So, CMA Fest, please welcome, Wynonna Judd.”

Wynonna, 57, then joined her fellow country singer on stage to belt out The Judds’ “Why Not Me” for the sold-out crowd. 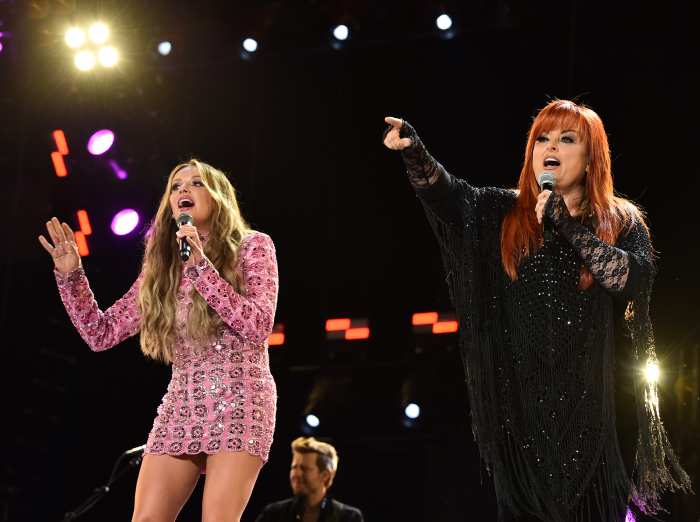 “I love @carlypearce and Carly loves me. The end. #carryingthetorch #proud,” Wynonna, who is one-half of The Judds musical duo, wrote via Instagram on Saturday, after the concert concluded.

Pearce, for her part, was equally enthusiastic about the duo’s musical collaboration. She wrote via her own Instagram: “Seeds of a dream. What a magical night at #CMAFest with one of my musical heroes. I love you, Wynonna 💗.”

Wynonna — who began making music with her mother in 1983 — and Pearce’s tribute comes nearly two months after Naomi died at the age of 76.

“Today, we sisters experienced a tragedy. We lost our beautiful mother to the disease of mental illness,” Wynonna and her sister, Ashley Judd, wrote in a joint Twitter statement on April 30. “We are shattered. We are navigating profound grief and know that as we loved her, she was loved by her public. We are in unknown territory.”

The Judd sisters later confirmed the late Grammy winner had died by suicide, after previously revealing she struggled with mental illness.

“The pain of losing Mom on 4/30 to suicide is so great, that I often feel like I’m not ever going to be able to fully accept and surrender to the truth that she left the way she did,” Wynonna wrote via Instagram last month. “This cannot be how The Judds’ story ends.”

She continued in her emotional post: “I feel so helpless — right now especially. I DO know, that as corny as it sounds, ‘Love Can Build A Bridge.’ I find myself humming the song that Mom wrote for the fans, to myself here on the farm at night. I really DO know, that I’m not able to do this grieving thing all by myself and that it’s okay to reach out for help. I will continue to fight for my faith, for my SELF, for my family, and I WILL continue to show up & sing.”

Read More: Surprise Performance! Wynonna Judd Sings ‘Why Not Me’ in Honor of Mom Naomi