Move over, Stan! Pete Davidson parodied Eminem‘s hit single “Stan” by turning it into a dark Christmas anthem — and even the Real Slim Shady got in on the action.

Davidson, 27, starred in the faux music video, which aired on the Saturday, December 5, episode of Saturday Night Live, as a Santa Claus-obsessed fan named Stu. The comedian wore a white tank top and sported bleach blond hair emulating Devon Sawa, who starred as Stan in the 2000 music video. 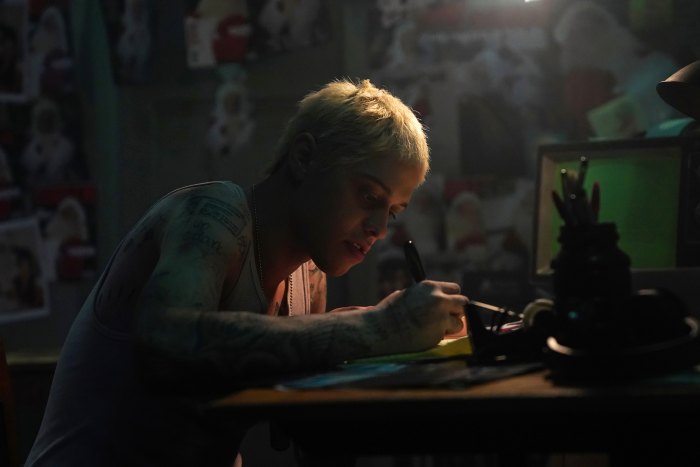 In the clip, Davidson writes letters to Santa, played by SNL host Jason Bateman, begging him for a PlayStation 5 for Christmas.

“Dear Santa / I can’t believe the year is almost over / It’s getting colder / I’m a year older but I’m still your soldier,” Davidson rapped on the track. “I tried to buy one at a Wal-Mart / Ran around the shopping mall like Paul Blart / Tried to find one for sale but the thing is that they’re all out/ Yo, I even went to a Game Stop / And then I was like, ‘Oh wait, stop, Santa Claus can make one / The man got his own workshop.”

After his letter goes unanswered, Stu sends another alarming message, writing, “If you can’t help your biggest fan then you should just retire / Or next time you slide down my chimney I’ll set your ass on fire.”

Kate McKinnon sang the chorus of the song, which featured Dido on the original track. Bowen Yang also appeared as Elton John in a nod to Eminem and the “Rocket Man” singer, 73, performing a duet at the 2001 Grammy Awards.

At the end of the video, Eminem, 48, appears on a TV in Stu’s basement. The “Lose Yourself” rapper opens a present and finds the PlayStation 5 that Stu wanted.

New Flicks Added! A Guide to Every Holiday Movie Airing on TV This Year Read article

Sawa, 42, seemed impressed with Davidson’s impersonation of the Stan character. On Saturday, the Idle Hands star tweeted a photo of himself in the video next to a snapshot of Davidson’s Stu, adding a laughing-crying emoji.

Davidson will appear in another iconic role when he stars as George Bailey during a live virtual table read of It’s a Wonderful Life on Sunday, December 13.