So Cute! George, Charlotte and Louis Speak on Camera for the 1st Time

Kensington Palace shared the sweet video via Instagram on Saturday, October 3. The clip marks the first time all three children have been recorded speaking clearly to the camera.

Charlotte, 5, for her part, asked, “Hello David Attenborough, I like spiders. Do you like spiders too?” to which the historian confirmed he also loves the insects.

We've got some questions for you, @DavidAttenborough…🌍🕷️🐒

Louis, 2, finished out the round of questioning when he asked, “What animal do you like?” Attenborough replied, “I think I like monkeys best because they’re such fun.”

Kensington Palace shared images via Instagram of the trio and their parents, Prince William and Duchess Kate, meeting Attenborough on September 26. 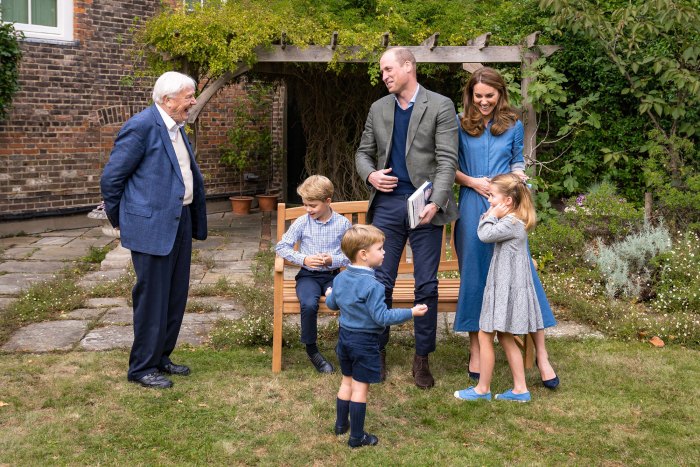 “The Duke and Duchess of Cambridge are delighted to share new photographs of their family with @DavidAttenborough,” the caption read. “The photographs were taken earlier this week in the gardens of Kensington Palace, after The Duke and Sir David attended an outdoor screening of Sir David’s upcoming feature film 🎞️ ‘David Attenborough: A Life On Our Planet’.”

The statement continued: “With a shared passion for protecting the natural world, they continue to support one another in their missions to tackle some of the biggest environmental challenges our planet faces. This includes working together on The @EarthshotPrize the most prestigious global environment prize in history – further details of which will be shared in the coming weeks.”

Kensington Palace also shared details from the royal family’s meeting, including that Attenborough gifted George a tooth from a giant shark.

“Sir David found the tooth on a family holiday to Malta in the late 1960s, embedded in the island’s soft yellow limestone which was laid down during the Miocene period some 23 million years ago,” the palace explained. “Carcharocles is believed to have grown to 15 metres in length, which is about twice the length of the Great White, the largest shark alive today.”

Kate, 38, revealed she’s an Attenborough fan when she and William, also 38, video-chatted with schoolchildren in northern England in April amid the coronavirus pandemic.

“The kids also asked them what the best famous person was that they had met — something I bet they don’t get asked very often!” Anita Ghidotti, chief executive of the Pendle Trust, said according to Hello! magazine. “The Duchess said that George has been watching lots of David Attenborough, Blue Planet and the like, so that would probably be hers.”

Read More: So Cute! George, Charlotte and Louis Speak on Camera for the 1st Time