He put a ring on it! After one year of dating, Leah Messer and Jaylan Mobley are engaged.

Celebrity Engagements of 2022: Stars Who Got Engaged Read article

Messer and the U.S. Army cyber officer have been dating since August 2021 after meeting at an ESPN and Army event one year prior.

“I just wanna continue getting to know each other. I think that with time, we’ll see if that’s something,” the Hope, Grace and Faith author exclusively told Us Weekly in March of her beau. “For me, I don’t think marriage should change anything. I think it has in the past for me. And I’ve been like, ‘What did I do?’ I think it’s scary. Like, we put a label on it, and it should go one way or the other. And I’m like, ‘That scares me a little bit.’ It does. It’s a huge commitment.” 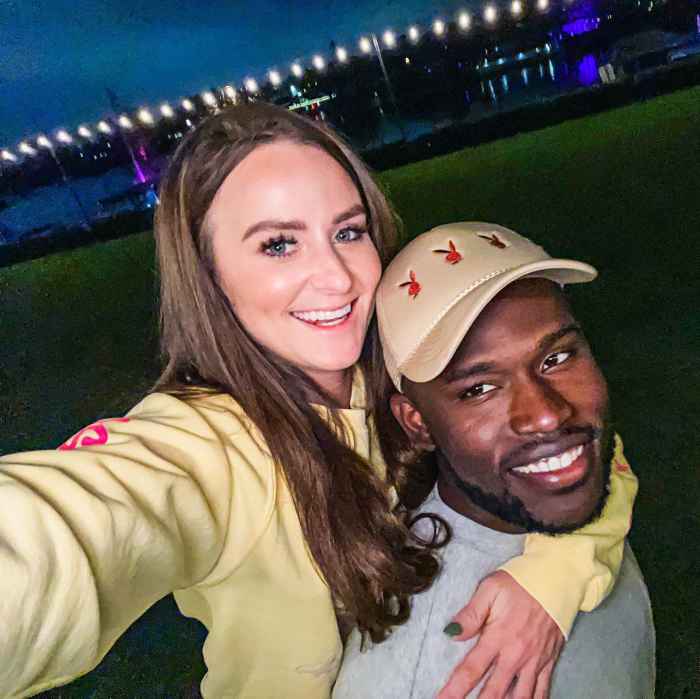 Prior to her romance with Mobley, the MTV personality has been married twice. She wed Corey Simms in October 2010. The duo — who split one year later — share twins Ali and Aleeah, both 12. Messer later was married to Jeremy Calvert, with whom she shares 9-year-old daughter Adalynn, between April 2012 and June 2015.

Messer has since been able to integrate Mobley into her home life while raising her three daughters.

“I think being less guarded myself and getting to know Jaylan personally allowed me to just trust him a little bit more and trust his intentions and really see the potential that we have together,” she told Us earlier this year. “And I think that’s why I opened up my life to him. I think [being in the public eye] is a lot of pressure on your relationship. So at the end of the day, I just wanted to get to know him a lot more before introducing him to my kids, my family, and the cameras.”

She continued: “I’ve been lying to you if I said we didn’t have days where … things come up, but I think it’s how we communicate and listen to each other that makes everything so different from any relationship I’ve ever been in, in the past. And the kids see that, they see the love.”

While Messer and Mobley are focused on their forthcoming nuptials for the time being, the West Virginia native isn’t sure if baby No. 4 is in the cards.

“There are days when I’m like, ‘Oh, my gosh, I would love to have a son,’” the former cheerleader previously told Us in May 2021. “Then there are days when I’m like, ‘Hell no. I’m not starting over again.’ So it’s kind of that fine line of whatever’s meant to happen will. I’m perfectly content being a mom to the three daughters I have and making sure that they’re successful in life. That’s it. … Whatever’s meant to be will.”