The football player, 34, was spotted performing at the Rolling Loud Festival in Miami on Friday, July 22. “Love Love,” he captioned Instagram footage from his concert. Brown sported an orange pair of overalls as he belted out his new single “Put That S—t On” off his Paradigm record.

The Florida native’s surprise Rolling Loud gig makes him the first athlete to perform at the festival, which also saw sets from the likes of Kid Cudi and Kanye West.

“AB has been in the conversation for best in the world at something, made millions, and has now performed at a major festival. He has LIVED,” a social media user wrote via Twitter at the time.

Another noted: “This is probably one of the best song an athlete has ever put out. Just to be clear I’m only comparing to other athletes only.”

The wide receiver previously made headlines in January after he abruptly whipped off his jersey and exited the field in the middle of the Bucs’ game against the New York Jets.

“He is no longer a Buc,” Tampa Bay head coach Bruce Arians told reporters after the game, in which the Florida-based team won. “That’s the end of the story. Let’s talk about the guys that were out there and won the game.”

Several days later, the Dancing With the Stars alum noted via a lengthy statement that he was let go from the team after an ankle injury, claiming he had to play despite being in pain. (The Bucs have since denied his allegations.)

“First of all, I’d like to express my gratitude to the Bucs, fans, and my teammates. The Bucs helped me return to productive football after I had difficulties that could have ended my career. We worked together to resolve those difficulties, and I will always appreciate that. Being part of a Super Bowl champion team and then a contender is a dream come true,” Brown said in his social media statement at the time. “I make mistakes. I’m working on myself and I have positive influences around me. But one thing I don’t do is shy away from playing hard on the field. No one can accuse me of not giving it my all every play.” 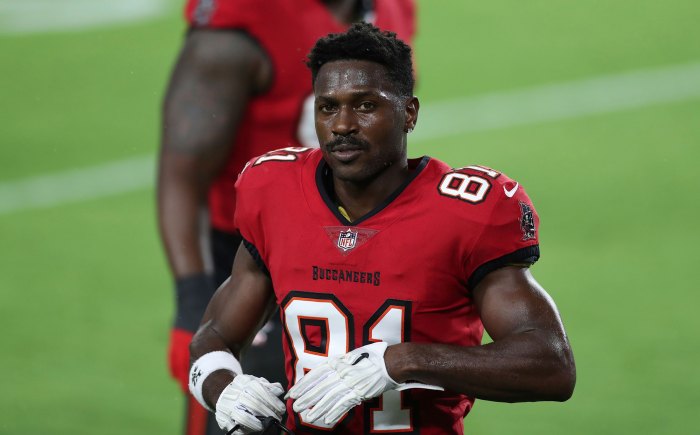 He continued: “I didn’t quit. I was cut. I didn’t walk away from my brothers. I was thrown out. Being fired on the sideline for having a painful injury was bad enough. Then came their ‘spin.’ Coach denied on national television that he knew about my ankle. That’s 100% inaccurate. Not only did he know I missed several games with the injury, he and I exchanged texts days before the game where he clearly acknowledged my injury.”