RHOC’s Braunwyn: My Daughter Bella Is ‘Struggling’ With My Dating Life

New normal. Braunwyn Windham-Burke couldn’t be happier since publicly coming out as gay — but some of her children still need a little time to adjust.

“It depends on the kid,” the Real Housewives of Orange County alum, 44, exclusively told Us Weekly while gearing up to appear as grand marshal of the OC Pride Parade and Festival later this month. “They haven’t all taken it the same.”

The reality TV personality shares seven children — Bella, Rowan, Jacob, twins Caden and Curren, Koa and Hazel — with husband Sean Burke, whom she wed in 2000. After two decades of marriage, Braunwyn opened up about her sexuality in a December 2020 interview with GLAAD. However, Braunwyn and Sean do not have plans to officially divorce.

“My oldest daughter, Bella, she’s still struggling with it,” the Bravo alum told Us. “Not with the fact that I’m dating a woman, ’cause we are a very open family. You know, we’ve always been big supporters of the LGBTQ community, even before they could walk. We were going to marches in D.C. when they were in strollers. So that wasn’t the issue.”

Braunwyn explained that Bella is having a “hard” time seeing her parents move on from their marriage, no matter who it’s with. “She’s 21,” the California native added. “She grew up with a certain family and, you know, that’s close to her heart.” 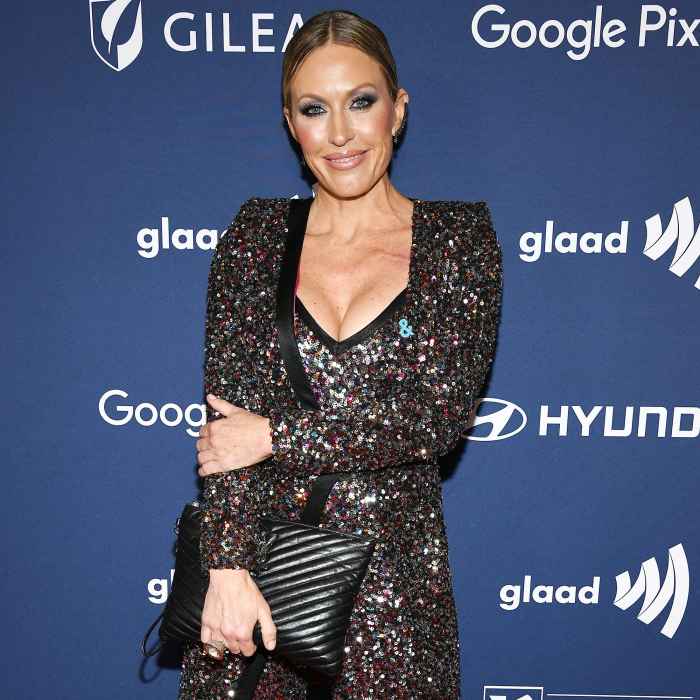 Following her romances with Jamie Parton and ex-girlfriend Kris, Braunwyn was spotted kissing Victoria Brito in Miami in December 2021. At the time, a source exclusively told Us that the relationship was “still very new,” but the twosome were “smitten by each other.”

While Bella has reservations about her family’s big changes, her sister Rowan “loves” Brito. “They get along great,” Braunwyn continued. “Jacob is a 16-year-old boy. He’s like, ‘Whatever, I don’t care.’ And the little kids, you know, as far as they know, it’s just more people that love them. And that’s sort of how Sean and I have presented this to them. Our family isn’t splitting up. Our family is growing.”

As for where she stands with Sean now, the coparents are making their unique relationship work. “There was definitely some hurdles, some bumps in the road,” Braunwyn told Us. “We had to work through some really hard things. There’s been some really trying times, but right now it’s really good. We’re coparents, we’re partners in life. You know, we’re definitely working toward the same goals and we’re getting along really well. … I think at the end of the day, we’re best friends.”

Last month, the former Housewife gushed over feeling more “free” with “phenomenal” Brito while attending the 2022 GLAAD Media Awards in New York City. “I think falling in love, especially falling in love later in life, it makes me appreciate it all so much more,” she told Us, adding that she was proud to “show women it’s never too late to start living your authentic self.”

Braunwyn will be showing her authenticity at Orange County’s Pride parade on June 25 after celebrating in New York City. “Orange County’s my home. It’s where I grew up. It’s where my kids live. So when they asked me if I would do it, I was like, ‘Oh, my God, of course,’” she told Us ahead of the big event. “Like, this is a dream come true. I can’t wait to represent Orange County.”

Leading the march is an important moment for the mother of seven, who added, “I have a large family, I have a rainbow-colored family. We joke that we have every letter of the LGBTQ [alphabet] in our family. So for me to show up for my kids, that means everything.”

Read More: RHOC’s Braunwyn: My Daughter Bella Is ‘Struggling’ With My Dating Life