A thing for girls named Ariana. Pete Davidson joked about marrying a fan who stopped him outside of Saturday Night Live because she has the same name as his ex-fianceé, Ariana Grande.

“My name is Ariana too!” a young woman screamed to the 27-year-old comedian outside of 30 Rock in New York City on Saturday, December 12.

Davidson, who was wearing a mask, quipped back, “Oh! Well, hello. Let’s get married.” 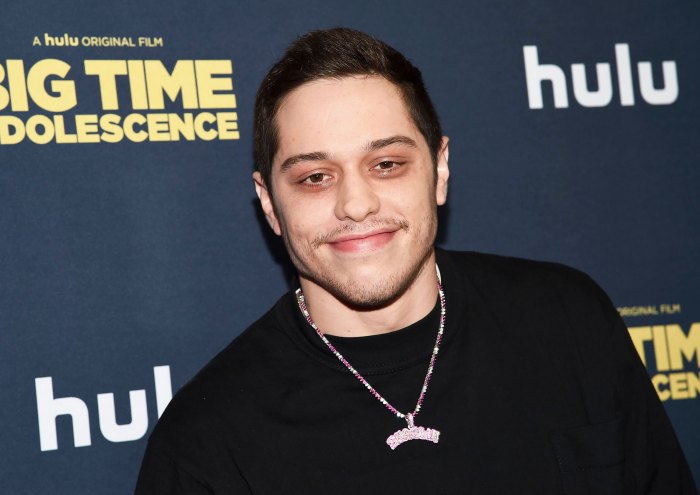 The fan subsequently jumped for joy and held up her ring finger as he walked away from her.

Davidson was previously engaged to Grande, 27, from June to October 2018. Us Weekly exclusively revealed the news of the pair’s engagement at the time. The King of Staten Island star’s whirlwind romance with Grande began days after his two-year relationship with Cazzie David ended in May 2018. The daughter of Larry David detailed their split in her new book, No One Asked for This, revealing she was shaking uncontrollably in her famous father’s arms on a flight to her sister’s college graduation when she learned her ex had moved on

After she woke up “screaming in agony,” Larry lost it. “CAZZIE, COME ON!” the Curb Your Enthusiasm star yelled at his daughter. “YOUR ANCESTORS SURVIVED THE HOLOCAUST!”

Cazzie also recalled that she learned of their engagement through her manager.

“She told me they were engaged,” she wrote. “And I laughed.”

Davidson, who has been linked to Kate Beckinsale, Margaret Qualley and Kaia Gerber following his broken engagement, reflected on his whirlwind romance with Grande in his November 2019 Paper cover story.

“I don’t ever make public statements about relationships ‘cause I just don’t think it’s right, you now? I usually express how I feel about anything through work,” he said at the time. “I hope she’s well. I hope she’s very happy. And that’s pretty much it.”

“Ariana sees something different in Dalton that she has never seen before in guys she has previously dated,” a source told Us in August, noting that she “really, really likes” the 27-year-old real estate agent. “He’s very protective of her, will go out of his way for her and does little things that are chivalrous. Dalton will go above and beyond to meet her needs.”