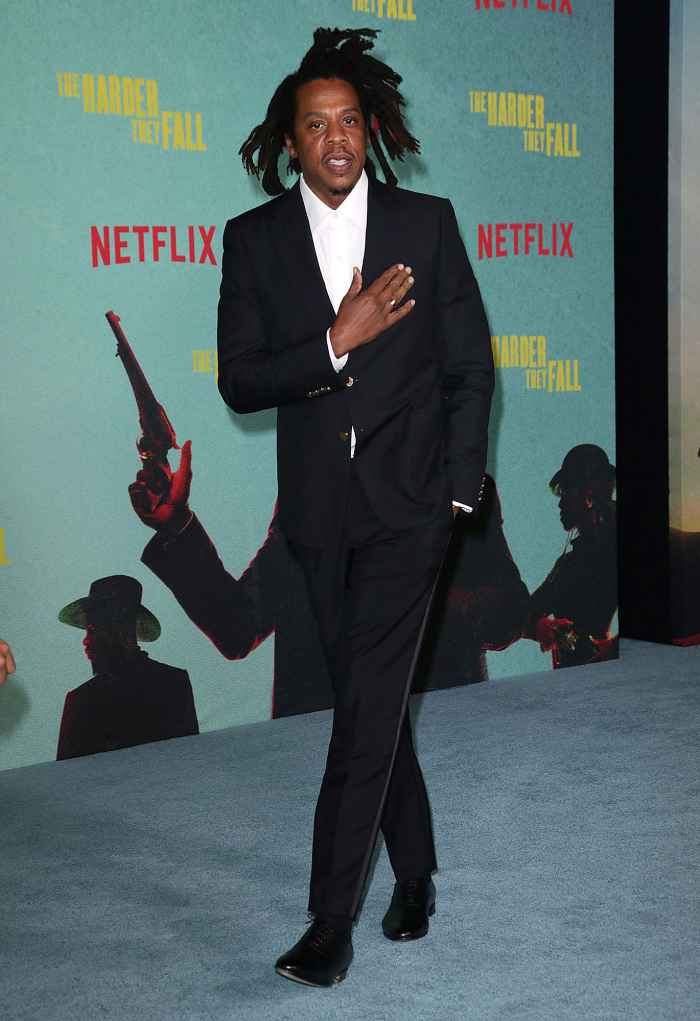 It’s Blue Ivy’s world! Jay-Z and Beyoncé’s 10-year-old daughter is stealing the show for her courtside appearance at the NBA finals with her famous father.

In a video shared by SportsCenter from the Golden State Warriors vs. Boston Celtics game on Monday, June 13, at Chase Center in San Francisco, the preteen appears to get embarrassed by the 52-year-old rapper as he puts his arm around his daughter. Jay-Z also kisses his child on the cheek in a sweet moment from the now-viral clip.

“To us: Jay Z, the all time rap legend,” one person tweeted. “To Blue Ivy: embarrassing dad.”

Jay-Z is in the crowd with his daughter Blue Ivy 🙌 pic.twitter.com/aP6VIhuazM

Another fan wrote, “Blue Ivy being so unimpressed by her VERY impressive parents will always be funny, they taking bout ‘24x grammy winner’ and she like YOU ON MY HAIR DAD😭😭😭.”

Other social media users couldn’t wrap their heads around how much Blue looked like Beyoncé, rocking a black leather jacket and gold hoop earrings.

“Beyoncé and blue ivy are literally twins,” a fan wrote alongside side by side pics. 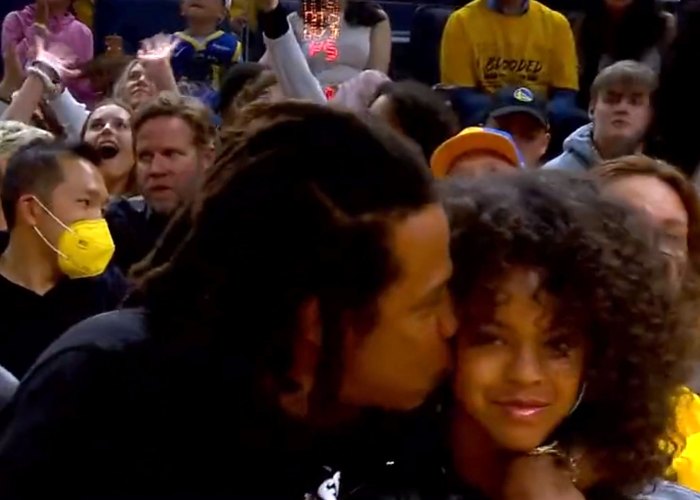 Another person referred to Blue as Beyoncé’s “carbon copy.”

A third person tweeted, “It’s crazy how blue ivy looks like both Beyoncé and Jay z. She’s so beautiful.”

The “Crazy in Love” collaborators welcomed their eldest daughter in January 2012. The couple, who wed in 2008, also share 5-year-old twins Sir and Rumi.

Beyoncé’s dad, Mathew Knowles, previously told Us Weekly that Blue reminds him of both the “Halo” singer and sister Solange Knowles. 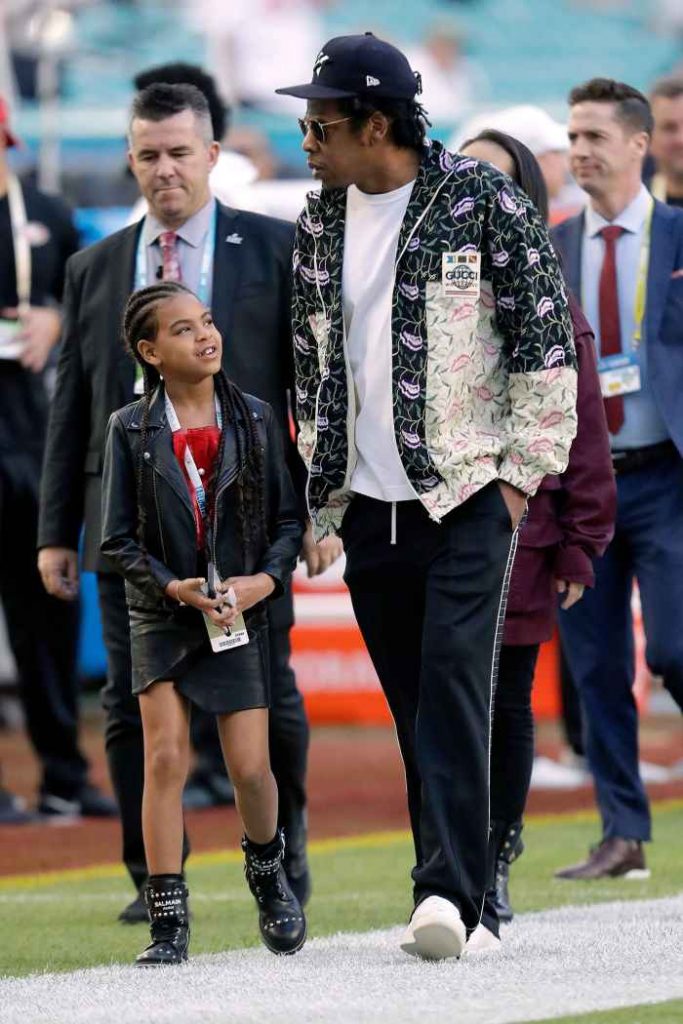 “I can see [them in her],” he told Us in April 2018, calling his granddaughter a “star” who he will support “in anything and everything” she hopes to achieve in life. “I only have one criteria: ‘Is that your passion? Is that the thing that excites you when you go to bed at night and you can’t wait until the next day? If it is your passion, then you have a huge chance of being successful. It can’t be what I want or what your mother and father want. It needs to be what you want to do.’ So if that was [her] passion, absolutely, I would be all for it.”

Blue has already gotten a taste for the music business, with her mother putting her in several music videos and her voice appearing on tracks with both of her parents.

More recently, Beyoncé revealed the moment she was extra proud to be Blue’s mother. 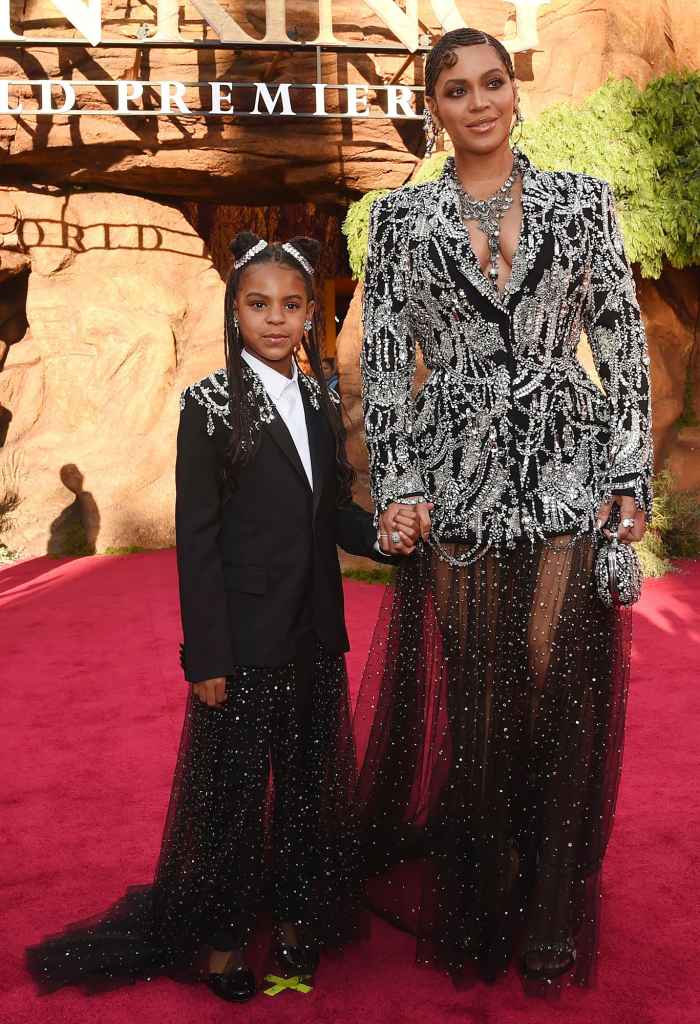 “One of my most satisfying moments as a mom is when I found Blue one day soaking in the bath with her eyes closed, using blends I created and taking time for herself to decompress and be at peace,” the Grammy winner said in her Harper’s Bazaar cover story in August 2021.

In an interview with British Vogue in October 2020, the musician added, “I truly cherish this time with my family. I’ve spent a lot of time focusing on building my legacy and representing my culture the best way I know how. Now, I’ve decided to give myself permission to focus on my joy.”