Minecraft Live: Players Can Choose The Next Mob To Be Added To Minecraft!

Minecraft is a game that is always getting new mobs/features added to not only keep the gameplay exciting for new and old players.

Minecraft has been continuously updated with both small updates and more massive feature updates. Some of these smaller updates are continually released to fix any bugs that may have been introduced due to the more enormous feature updates, including updates like the Nether Update.

Both the Java Edition and the Bedrock Edition have been updated continuously with both types of these updates. Still, both editions have similar features but not the same features or the same implementation.

Mojang Studios has stated that players will be able to vote for the next mob to be added into Minecraft; the voting for this next mob is set to happen during the live stream at twitter.com/minecraft October third.

There are currently three mobs that are up for the voting; these mobs include Iceologer, MooBloom, and the Glow Squid. At the same time, some of these mobs are have been introduced in a variety of Mojang Studios properties, which can either be Minecraft Dungeons or Minecraft Earth.

The Glow squid is a mob that players can see in Minecraft Earth while having it in Minecraft would add another mob that is completely neutral and glows similarly to the Enderman’s eyes, which is shown in how the squids prefer dark bodies of water. 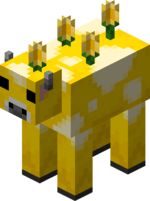 The Moobloom is another mob taken from Minecraft earth and is essentially a standard cow with daisy flowers coming from the cow’s head and body. This also changes the cow’s color scheme to be yellow and a lighter yellow, which is significantly different when compared to the standard cow.

The Iceloger is the only mob on this voting list that isn’t from Minecraft Earth. This mob is from Minecraft Dungeons. This mob will move to the mountain tops that don’t have a mob for that biome; these mountain biomes would make scaling these large mountains even tougher.

This mob will throw flying ice clouds, which could potentially lead to some very tough snowball fights while having to worry about falling from these large mountains.

This vote will start on October third and be available on Minecraft’s twitter account; this shows that the players can affect Minecraft’s development!

Read More: Minecraft Live: Players Can Choose The Next Mob To Be Added To Minecraft!