“Little Costumes Everywhere,” Kaling, 41, wrote via Instagram on Friday, October 30, alongside a photo of her dual costumes.

The Mindy Project creator recreated the promo photo for the Hulu series, which originally featured Witherspoon’s Elena Richardson on the left and Washington’s Mia Warren on the right, with a burning divide in the middle. 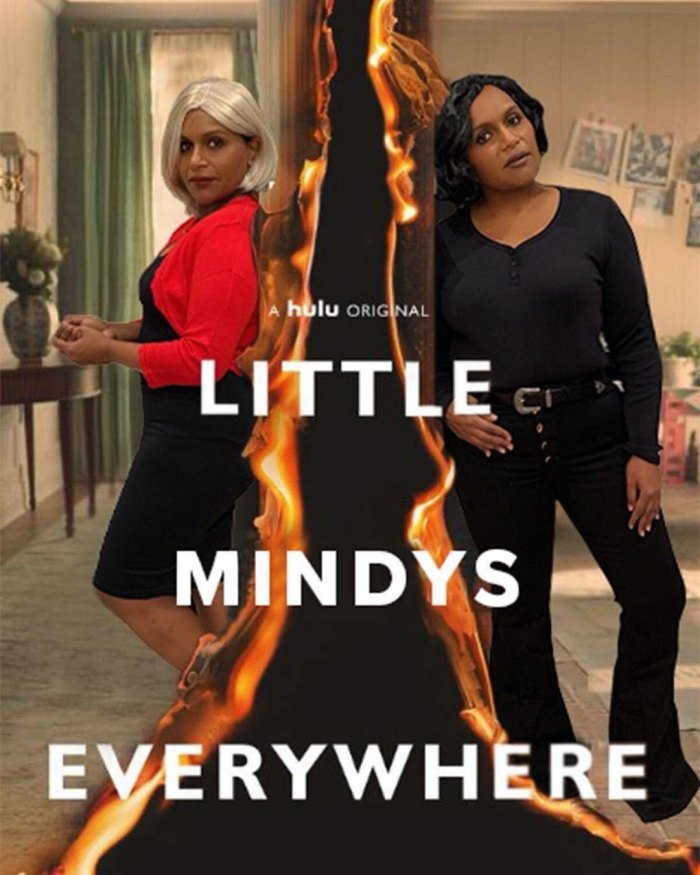 In Kaling’s version of the image, she wore a short blonde wig, red cardigan and black dress as Elena and an all-black ensemble and matching black wig as Mia. The recreation snap also had the words “Little Mindys Everywhere” written across it.

A day prior, the Office alum honored Netflix’s Never Have I Ever, which she cocreated with Lang Fisher, by dressing up as its lead character, Devi.

“What’s a’poppin?! Do you like my Halloween costume?” she captioned a photo of herself channeling the teenager’s recognizable outfit from the series.

Last year, Kaling dressed up for Halloween as another memorable pop culture character. She portrayed Brad Pitt’s Once Upon a Time in Hollywood character, Cliff Booth, wearing a similar floral overshirt, the same “Champion” tee, big belt buckle, jeans and loafers. She topped off the look with a blonde wig, sunglasses and a toy dog to resemble his Pitbull, Brandy.

“Am I doing this right?” Kaling asked her friend via Instagram in December.

The comedian recreated a look from Elle’s time at Harvard Law School, when she is in her dorm wearing a blue robe with smiley-face clouds on them. Kaling took it a step further by holding onto a stuffed animal dog — as Bruiser Woods — and pretended to be talking on a pink phone.

Earlier this month, the cast of Legally Blonde reunited virtually for the first time in 20 years to raise money for World Central Kitchen. During the chat, the stars confirmed that Legally Blonde 3, which Kaling is cowriting, will be released in May 2022.