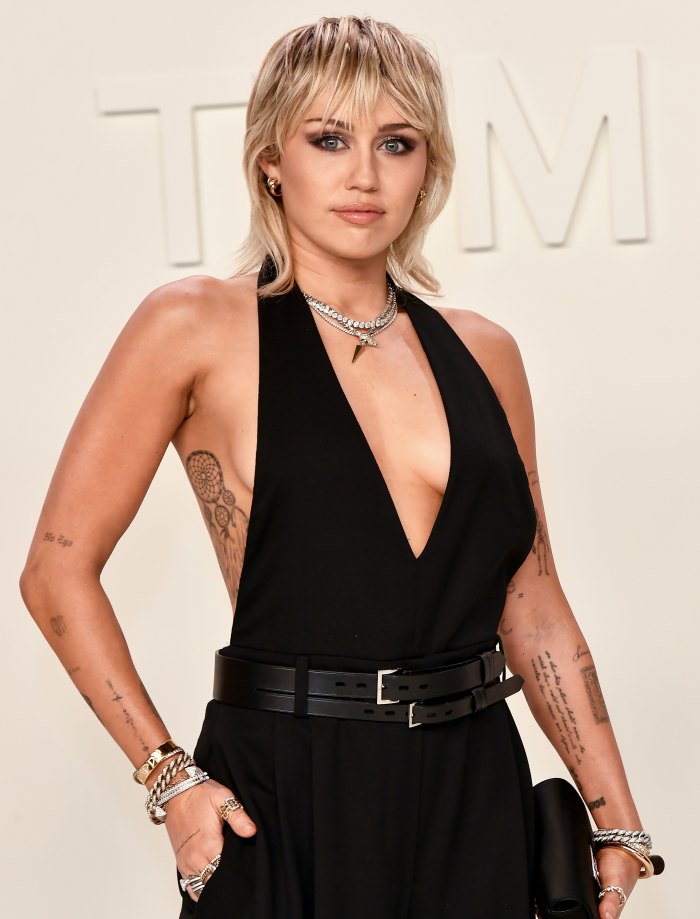 It’s no secret that Miley Cyrus has a lot of tattoos. But exactly how many does she have? Even she doesn’t know.

When appearing on Jimmy Kimmel Live! on Monday, December 7, the 28-year-old performer played a game with a fan called “Who Knows Miley.” When Jimmy Kimmel asked how many tats the “Prisoner” singer has, she replied, “I have no idea.”

“How do we know this and you don’t?” the host, 53, asked. “Because you are probably much more coherent when I am getting these tattoos.”

Along with her body art, the hitmaker also maintains her rocker image with an edgy hairstyle, which she admits is basically genetically predisposed thanks to her family’s history with the look.

Miley Cyrus on How the Public Thinks Her Hair Is a Reflection of Her ‘Sanity,’ ‘Sexuality’ and ‘Sobriety’ Read article

The Disney Channel alum said that when her hair started growing out during the COVID-19 pandemic, she depended on her mom Tish Cyrus to trim it. But there’s only one hairstyle she can truly master: the mullet.

“I already had bangs and they were getting long,” she explained. “And [my mom] said, ‘Well I can cut your hair, but I only know how to do one hairstyle, and I’ve been doing this since 1992 for your dad and for your brothers.’ And all my mom can do is a mullet, so I had one option and needed it.”

She continued, “It just kinda grows naturally shorter up top and longer in the back, that’s just kind of a natural shape that our hair grows in.”

Less than a week prior to this appearance, the hitmaker spoke on The Howard Stern Show about how the public judges her well-being based on her hair.

“My hair is some sort of reflection for my sanity, my sexuality, my sobriety,” she told Howard Stern. “The public really makes my hair, I guess, the kind of monitor of how I am doing.” For instance, she said when her hair would be long and blonde people would assume she was sane. But when she had it painted or grew out her armpit hair, they’d assume she was doing drugs.

But she understands that his mentality was born out of her role on Hannah Montana. “It’s really not [the public’s] fault that they associate my hair and my identity and my well-being so closely,” she said. “Because basically, we drilled that into their brains for 8 years of a series.”

Read More: Miley Cyrus Finds Out How Many Tattoos She Has on ‘Jimmy Kimmel Live’