Confiding in a friend? Lily James dined with her Mamma Mia! Here We Go Again costar Dominic Cooper in London a month after she was caught canoodling with Dominic West.

In photos obtained by the Daily Mail, the 31-year-old actress and the 42-year-old actor were spotted walking to their cars outside of Lemonia Greek restaurant in north London on Tuesday, November 3. James attempted to keep a low-profile as Cooper followed her out of the restaurant with a bottle of wine in hand. 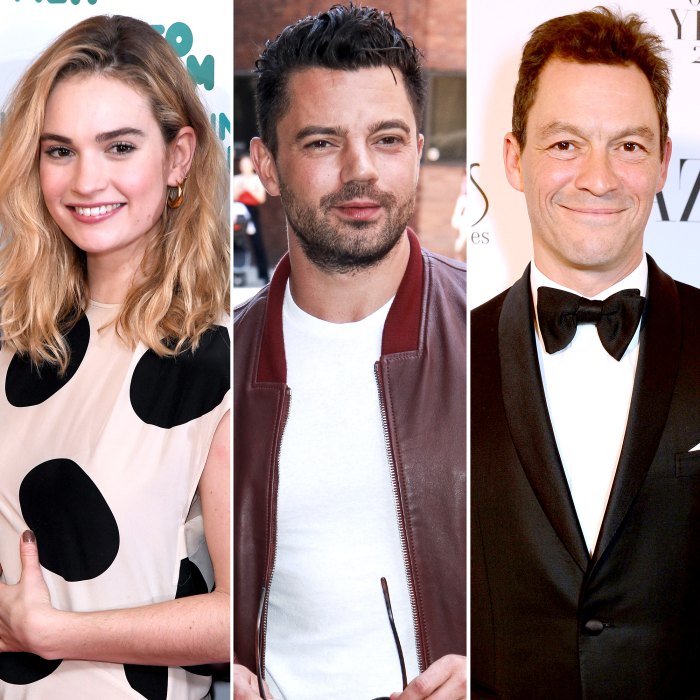 The Cinderella star has done minimal press for her new film, Rebecca, in recent weeks after photos of her packing on the PDA with West, 51, made headlines. In the snaps, James and the Affair star, who is married to Catherine FitzGerald, were seen cuddling and kissing in Rome. West and FitzGerald, 49, meanwhile, posed for PDA-filled photos of their own one day after the scandal broke on October 13.

“Our marriage is strong and we’re very much still together,” he wrote in a note to reporters at the time. “Thank you.”

James, for her part, has yet to address the situation. “Dominic and his wife wanted to put up a united front,” an insider told Us last month, but James and FitzGerald “were both horrified by the pictures.”

James and West met while filming the upcoming BBC One miniseries Pursuit of Love. They play a father and daughter in the romance drama.

A second source told Us that the costars were “flirtatious” on set.

“Dominic and Lily had spent a lot of time together on set working together,” the insider revealed. “Dominic didn’t seem to be trying to hide the fact that he was attracted to her. The way Dominic was carrying on with Lily people assumed that he was allowed to stray from his marriage.”

According to the first source, however, the photo scandal has “strained” their “working and personal relationship.”

James was previously linked to The Crown‘s Matt Smith from 2014 to December 2019 and more recently, Chris Evans. When asked about her romance with the Captain America star by The Guardian last month, she played coy.

“No comment,” James said. “I couldn’t confess to breaking laws, you know.”