Her lips are sealed. Lily James won’t spill any secrets when it comes to her flirtatious photographs with Chris Evans.

While speaking with The Guardian earlier this month, the 31-year-old Rebecca actress kept her cool when she was pressed about her love life. James dated The Crown‘s Matt Smith from 2014 to December 2019, and in July, was briefly linked to the 39-year-old Captain America star. Despite speculation about her relationship status, the interviewer noted that James was “too sensible” to reveal the details. 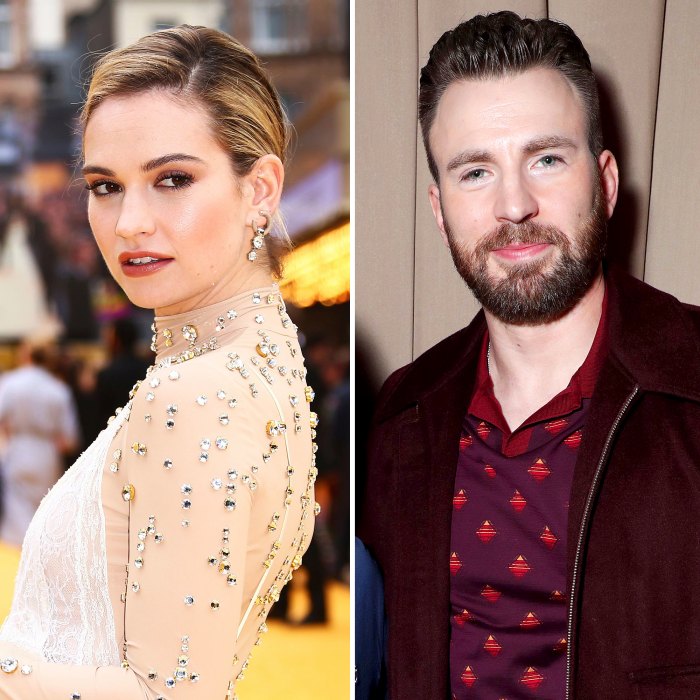 “No comment,” the Mamma Mia: Here We Go Again actress teased, adding, “I couldn’t confess to breaking laws, you know.”

James relayed her coy response with a “suggestive smile” and claimed to have “spent the summer on her own, at home in London, reading poetry aloud and watching films.” Photos from two separate outings with Evans, however, appear to prove otherwise.

The Baby Driver star and the Gifted actor were spotted leaving a posh club together in London’s Mayfair neighborhood in July, sharing a cab at the end of their night out. Days later, the twosome got cozy in a nearby park, lounging on the grass with ice cream cones in hand. Though fans have hoped to see a romance brewing between the pair, James has consistently kept quiet, dodging a question about the Boston native while speaking with Harper’s Bazaar UK in September.

“Don’t be obsessed by boys!” she told the publication at the time, giving a word of advice to her younger self. “Hang out with your girl mates. And don’t take everything so seriously — be kind to yourself.”

Three months after she was seen with Evans, the Yesterday star made headlines once again when she was caught kissing actor Dominic West in Rome. The duo, who costar in the upcoming BBC One miniseries The Pursuit of Love, rode around the city on a scooter before cozying up at lunch with their manager. Shortly after the pictures made rounds on the internet, West, 50, and wife Catherine FitzGerald set the record straight about their relationship.

“Our marriage is strong and we’re very much still together,” the pair wrote in a note after showing a united front at their home in England. “Thank you.”

The Affair alum and his wife share four children Dora, 14, Senan, 12, Francis, 11, and Christabel, 5. West is also the father of daughter Martha, whom he shares with ex-girlfriend Polly Astor. After the PDA pics gained attention, a source told Us Weekly exclusively that James was “horrified.”

“It has strained Lily and Dominic’s working and personal relationship too,” the insider added.