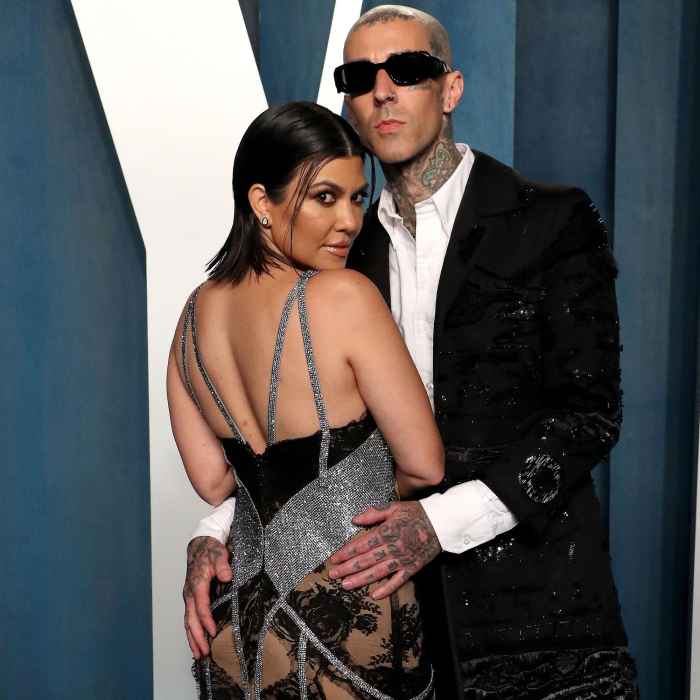 The sweetest memories! Kourtney Kardashian shared a never-before-seen glimpse of her and Travis Barker‘s courthouse wedding ceremony in a tribute to grandmother Mary Jo Campbell.

“My special, sweet, chic, sophisticated, smart and most wonderful grandmother. Happy birthday my MJ ❤️,” the Poosh founder, 43, captioned a carousel of Instagram pics on Tuesday, July 26. “So happy you could be one of the only two guests we had when we were legally married, I will always remember this day and night with you.”

In the slideshow, Kardashian sat beside Campbell, 88, and Barker, 45, as they raised their glasses for a toast. The musician’s father, Randy, was also present for the small ceremony, which took place in May in Santa Barbara, California.

Another snap showed the Blink-182 drummer and his wife signing their marriage certificate, which made the union legal.

‘The Kardashians’ Season 2: Everything to Know About What’s Next Read article

Kardashian and the Meet the Barkers alum got engaged in October 2021, less than one year after Us Weekly confirmed their romance. The twosome held an unofficial wedding in Las Vegas after attending the 2022 Grammy Awards in April, one month before sealing the deal in California. Barker and the former E! personality flew to Italy days after their legal ceremony for a larger celebration of their love.

Ahead of their European nuptials, a source exclusively told Us the couple wanted to keep the specifics of their big day under wraps. “They’re so ready to be husband and wife. They couldn’t be more in love,” the insider revealed in January. “[Kourtney] doesn’t want any details of her wedding getting out as she wants it to be a surprise to guests. It’s going to be a fairy tale wedding for sure, though.”

The pair arrived in Portofino, Italy, on May 20 with several of Kardashian’s family members in tow, including Kris Jenner, Kim Kardashian, Khloé Kardashian, Kendall Jenner and Kylie Jenner. While Rob Kardashian was noticeably absent from the ceremony, a source told Us it wasn’t personal.

“He is still very much private and prefers low-key celebrations where there aren’t a lot of photographer,” the insider explained in May, adding that the 35-year-old ��really wanted to be there for Kourtney’s special day” but “doesn’t like being in the spotlight.”

Kourtney’s ex Scott Disick also did not attend the bash, but the former couple’s three children — Mason, 12, Penelope, 10, and Reign, 7 — were on hand to celebrate. Barker’s kids with ex-wife Shanna Moakler — son Landon, 18, and daughter Alabama, 16 — and stepdaughter Atiana, 23, gave glimpses of the affair via their social media.

“All the Barker family and Kardashian family were dancing together when DJ Cassidy played [Blink-182’s] ‘All the Small Things,’” a source told Us in May of the post-wedding bash, which lasted until “after 3 a.m.”