Raw and real. Kim Kardashian broke down in tears during her interview with David Letterman on the upcoming season of My Next Guest Needs No Introduction.

In the season 3 trailer for the Netflix series, which dropped on Tuesday, October 6, the Keeping Up With the Kardashians star, 39, kicks things off with Letterman, 73, while shopping.

“Hey, guys!” Kardashian says while holding her phone up to make a video. “Should I be in it, or no?” the talk show host asks, popping his head into the screen.

The Skims creator tells the comedian to stay on screen, saying, “That’s great. Then I will Airdrop it to you. Do you know what Airdrop is?” Letterman makes a face and replies, “Sure.” 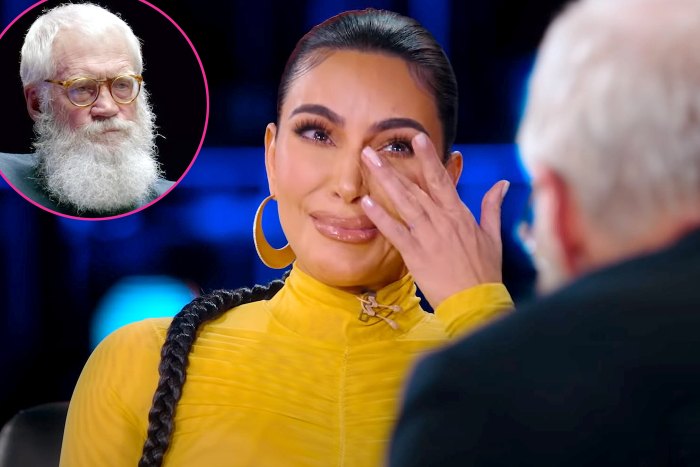 Later in the teaser, the KKW Beauty founder sits down with the former Late Show With David Letterman host to talk about a more somber topic.

“No, no, no, no, are you alright?” Letterman asks as Kardashian starts to cry.

She replies, “I don’t know why I’m crying. I’ve talked about this before,” but doesn’t reveal what’s caused her to break down on camera.

The rest of the trailer shows the Emmy winner’s three other guests for the new season, Lizzo, Dave Chappelle and Robert Downey Jr., ahead of its October 21 premiere.

The “Truth Hurts” singer’s snippet teases a chat about her body image and music, while Chappelle, 47, is seen walking through the woods with Letterman and discussing the Black Lives Matter protests.

The Iron Man actor, 55, jokes about prison and then takes Letterman around a farm during his candid interview.

Kardashian’s husband, Kanye West, was on season 2 of the Netflix talk show, where he opened up about their family, his bipolar disorder and backlash for his support of President Donald Trump.

The reality star, for her part, has had many ups and downs over the past few months, starting with West’s announcement in July that he is running for president of the United States in the 2020 election.

He followed up the shocking revelation with a series of allegations directed at Kardashian and her mother, Kris Jenner, via Twitter. One tweet claimed West had been trying to divorce his wife for two years, while another claimed she tried to lock him up.

The “Jesus Walks” rapper went on another Twitter rant last month, this time directed at the music industry. At the time, West shared a video of himself peeing on one of his Grammy trophies and declared that he wouldn’t release any new music until the end of his current contract.

A source exclusively told Us Weekly that Kardashian “doesn’t care about the tweets” but was worried about her husband’s “mood swings and the manic episodes [which] are extremely difficult for Kim to help Kanye cope with.”

After a few rocky months surrounding West’s mental health struggles, a second source told Us that “Kim is considering her options when it comes to her future with Kanye.”

The insider added that the California native is “hoping and waiting for this to pass” but she “does have divorce options planned out if it comes to that.”

Season 3 of My Next Guest Needs No Introduction With David Letterman drops on Netflix on October 21.