The end of an era. Kim Kardashian and Pete Davidson have called it quits after less than one year of dating, multiple sources confirm to Us Weekly.

“They amicably split this week,” an insider told Us of the Kardashians star, 41, and the Saturday Night Live alum, 28.

The Hulu personality and the comedian were first linked in October 2021 after Kardashian made her hosting debut on SNL. During one sketch, the California native and the Guy Code alum shared a kiss in character as Jasmine and Aladdin, respectively. 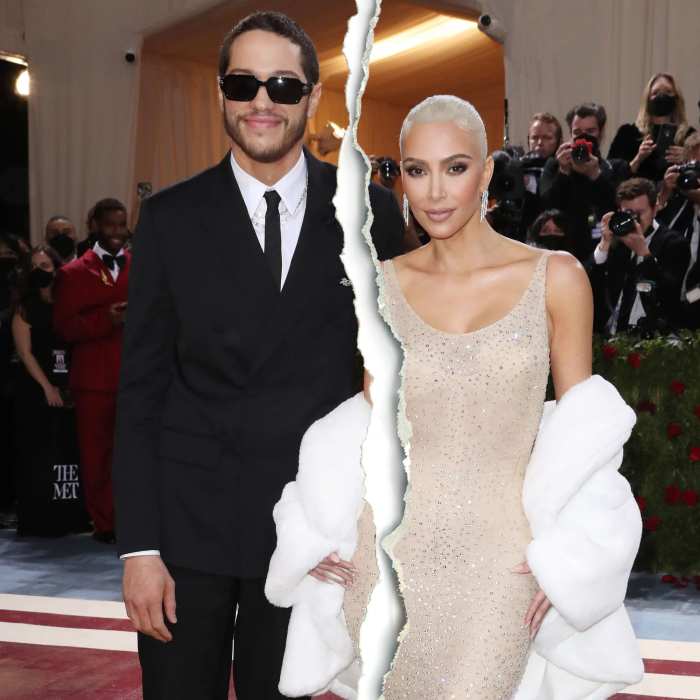 Though the Skims founder and the New York native initially kept their romance under wraps, the pair became more generous with glimpses into their relationship as time went on.

The King of Staten Island actor and the reality star went Instagram official in March. The long-awaited confirmation came on the heels of countless comments from the former E! star’s ex-husband Kanye West, who made his hatred toward Davidson — and his desire to get back with Kardashian — well-known.

Two months later, the entrepreneur and the Suicide Squad actor made their red carpet debut at the 2022 Met Gala — and the cute, loved-up Instagram posts kept on coming. In July, Kardashians viewers got their first peek of Davidson on the show when the trailer for season 2 premiered.

“Babe? Do you want to jump in the shower with me real quick?” Kardashian asked her then-boyfriend in the clip, which saw him immediately drop everything he was holding and rush after her.

More recently, however, the duo’s romance became long-distance as Davidson has been in Australia filming the upcoming movie Wizards! The Keeping Up With the Kardashians alum recently paid her beau a visit, but for the most part, they’d been communicating via video chats and emails.

“They send each other love notes while the other is sleeping and FaceTime whenever their schedules link up,” an insider told Us earlier this month. “The distance has been hard, but even communicating long-distance is exciting for them.”

Last month, the Dirt actor told Kevin Hart that he was fine with the massive amount of attention their romance has attracted over the last several months. “I don’t mind. I know what it comes with,” Davidson explained during the July premiere episode of Hart to Heart. “I totally get it because whatever I get to do is sick. If that’s all you have to deal with then whatever.”

The Meet Cute star went on to say that he hopes marriage and fatherhood are in his future. “[I’m] definitely a family guy,” he explained. “My favorite thing ever, which I have yet to achieve, I wanna have a kid. That’s like my dream.”

Kardashian, for her part, shares North, 9, Saint, 6, Chicago, 4, and Psalm, 3, with West, 45. The Selfish author was declared legally single in March after filing for divorce from the rapper in February 2021.