“Kendall and Devin are hooking up and dating,” a source exclusively tells Us Weekly. “She invited him to Kim’s birthday and knew it would be easy for him to hang out with her family and friends.”

The Phoenix Suns player, 23, “enjoyed hanging out” with Khloé Kardashian’s boyfriend, fellow NBA star Tristan Thompson, during the weeklong getaway, according to the insider. 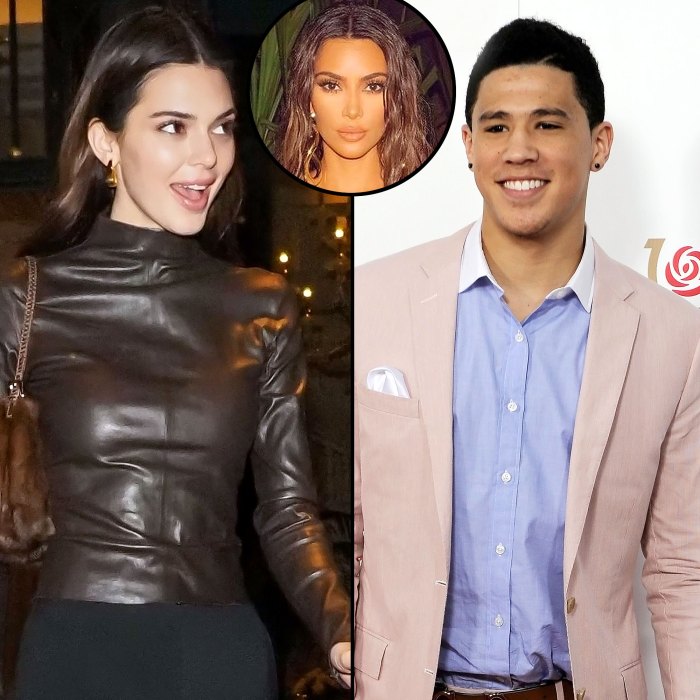 Jenner, 24, has posted photos from the island vacation, including snaps of herself sipping on fruity drinks and sexy bikini images while at the beach, but none with her beau.

“Locations a secret,” the Keeping Up With the Kardashians star captioned a series of photos and videos from the trip via Instagram on Tuesday, October 27.

Eagle-eyed fans spotted the reality star standing next to Booker, however, in a photo shared by Kim, 40, on Tuesday.

The snap showed Scott Disick and his eldest son, Mason, hugging during Kim’s celebration, with the athlete and Jenner hidden in the background.

The model and the basketball player were first linked in April after going on a road trip to Sedona, Arizona, together. Their relationship has remained casual over the past six months.

“Kendall likes Devin, and he doesn’t want her dating anyone else, but she wants to keep her options open,” the source says. “He makes her laugh, and they are so cute together.”

Jenner’s family vacation also included time with her siblings Khloé, 36, Kim, Kourtney Kardashian and Rob Kardashian. Her younger sister, Kylie Jenner, missed the festivities because she was “tied up with other commitments,” a source previously told Us.

The Skims founder’s husband, Kanye West, arrived late to the island due to “work commitments” but hasn’t been featured in any snaps on his wife’s Instagram from the bash. Kendall’s best friend Fai Khadra was also on the island to party with the famous family.

Earlier this month, a source told Us that Kendall and Booker’s relationship is “not super serious and they’re just having fun together.”

Us confirmed in June that the Kendall + Kylie cofounder and Booker were “hooking up” casually following their April trip. “She’s talking to a couple of different guys,” a source noted at the time.

Kendall was previously linked to basketball player Ben Simmons, whom she split from in May 2019 after dating on and off for a year. She has also romanced Harry Styles and Blake Griffin.