Praising the hard work. Following reports of a toxic culture at The Ellen DeGeneres Show, the longtime host took the time to honor her staff during the Sunday, November 15, People’s Choice Awards.

The Ellen’s Game of Games host, 62, then took the opportunity to thank those who have supported her through the years, especially through the latest backlash. 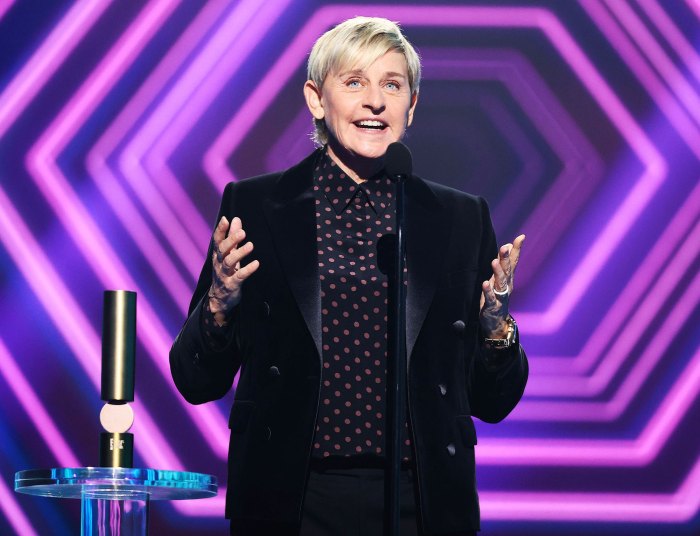 “I know this award comes from the people. I say thank you to the people. Thank you to all of my fans for supporting me, for sticking by me,” she added. “I cannot tell you how grateful I am and what this means to me. It’s more than I can possibly tell you — especially right now.”

The Emmy winner faced controversy earlier this year when BuzzFeed News published two pieces with former and current employees claiming she had fostered a toxic culture at the talk show. WarnerMedia launched an internal investigation into the talk show.

Two months after apologizing to her staff in a memo sent out in July, the comedian returned to TV and discussed the allegations during the season 18 premiere of her talk show.

“I learned that things happened that never should have happened. I take that very seriously,” she explained to her virtual studio audience on September 21. “I want to say I am so sorry to the people who are affected. I know that I am in a position of privilege and power and I realize that with that comes responsibility. And I take responsibility for what happens at my show. This is The Ellen DeGeneres Show.”

The Biggest Talk Show Controversies and Feuds Ever Read article

She added that “a lot of conversations” have taken place in the months following the allegations and that “necessary changes” had been made. (Three executive producers were ousted from the show following claims of misconduct made against them.)

“The truth is, I am that person that you see on TV. I am also a lot of other things,” the Louisiana native added. “Sometimes I get sad, I get mad, I get anxious, I get frustrated, I get impatient — and I am working on all of that. I am a work in progress, and I am especially working on the impatience thing and it’s not going well because it’s not happening fast enough. I will tell you that.”