Going method! Dylan O’Brien was asked to transform into an e-boy influencer for his film Not Okay — and he had no trouble getting into character.

‘Teen Wolf’ Cast: Where Are They Now? Read article

“I think it was so dead-on because it’s just like all we see,” O’Brien, 30, told Entertainment Weekly in an interview published Thursday, July 28. “I feel like, you’re just scrolling through news and it’s like, ‘Oh, thirst trap!’ The f—boys are everywhere! Gotta watch out.”

Not Okay stars Zoey Deutch as Danni Sanders, a desperate and lonely wannabe writer who fakes a trip to Paris while hiding out in her Brooklyn apartment. When a terrorist attack hits the City of Love, she uses the tragedy to become a social media celebrity. O’Brien, for his part, plays opposite Deutch, 27, as love interest — a clout-chasing micro influencer desperate for fame.

Studying the internet’s biggest content creators, the Teen Wolf alum knew he wanted to dedicate himself fully to the role. “From the first conversation with [director] Quinn early on, I was just like, ‘I want to go full-on, just like full tats, bleach the hair,’” the Love and Monsters star explained, adding that he had “an incredible team of people that assembled it entirely for me.”

The New York native, who improvised many of his lines due to being so “locked into” the character, told EW on Thursday that he “loved” playing the role so much, he would “go back and do it better” if he could.

“Somebody had tipped me off to, like, a f—boy greeting of, like, ‘Let me get a huggie,’” O’Brien recalled of some of his improv, before admitting that the person who told him about the line “was a girl I was seeing at the time.” 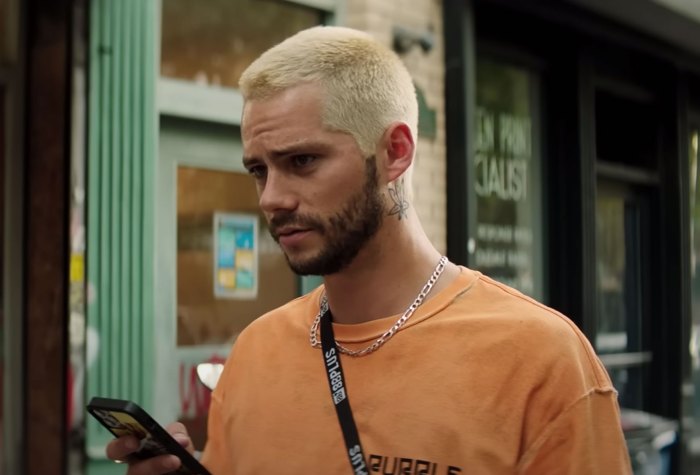 Earlier this month, the Maze Runner actor expanded on how his previous relationship serendipitously helped inspire him to play such an unlikable character during a chat with Interview Magazine.

“I was actually dating a girl that summer for a bit and I was picking up a lot of things from her, too. She had that sort of vibe,” he revealed of his former beau. “Like she’d be constantly saying, ‘OD as f–k,’ and ‘No cap, and cap, no cap.’ Just all these terms. I would just be walking around my house, and would just record riffs on my phone. I really wanted to explore the dichotomy of him always having these beliefs, and then his actions being completely fake as f—k.”

O’Brien’s new chapter comes months after choosing not to return for the upcoming Teen Wolf movie. The actor portrayed fan-favorite Stiles Stilnski on the show, which ran on MTV from 2011 to 2017, and his love for the character and the original series is part of what had him initially considering coming back for the Paramount+ film revival.

“The show couldn’t be more dear to me. It was the first thing I ever did I and so many people there are extremely dear to me,” O’Brien told Variety in March. “It was something I was trying to make work, but it all happened very fast.”

The Amazing Stories alum noted that “a lot” went into making the difficult decision to ultimately pass on the project. “We didn’t really know that it was happening and they kind of just threw it at us a little bit, which is fine because we all love the show,” he explained. “We were trying to figure it out. I just decided it was left in a really good place for me and I still want to leave it there,” he explained.