Disney week has come and gone but there’s a lot more excitement coming on season 29 of Dancing With the Stars. During this week’s episode of the “Watch With Us” podcast, we break down everything that’s still in the pipeline, including pro-turned-host Derek Hough‘s return to the ballroom floor for the first time since 2017.

“I’m very, very excited, and I’m even more excited that I’ll be dancing with my lovely girlfriend, my love,” the six-time DWTS champ, 35, told reporters on Wednesday, September 30. “So, we get to dance together in the ballroom. We’re already planning it. We actually did, like, a little session yesterday, and we woke up this morning very sore!”

Hough, who last competed on the show in 2016, also couldn’t help but discuss the “magic” of being back on the show.

“I walked into the ballroom the other day by myself when it was empty, during a lunch break, and I just kind of walked around that space and I just was, like, wow — the memories, the nostalgia that I felt,” he shared. “Being a part of this show has been such a dream, and I’m so thankful for it. To have the honor and the pleasure to perform once again in this sacred space, it really is a pleasure. I certainly don’t want to disappoint.” 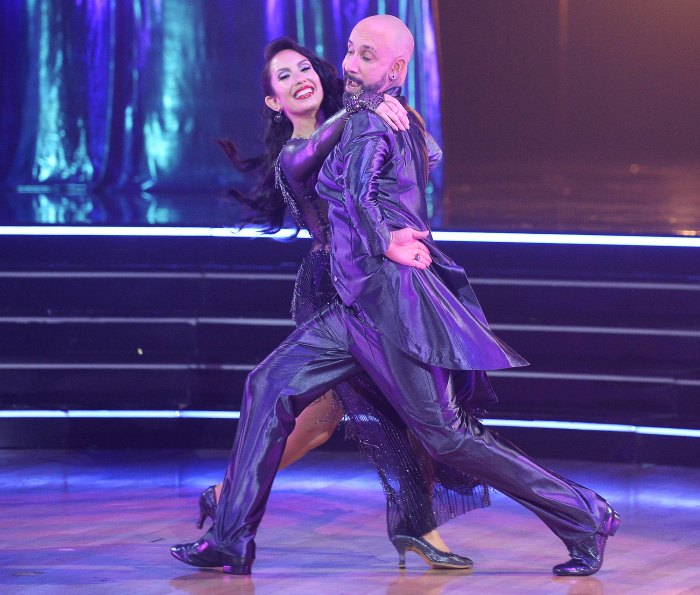 In addition to Hough’s performance, this season will also include multiple theme nights coming up every other week. The Monday, October 12, episode is set to be ’80s night. Two weeks later will be the Halloween episode, which this year, will focus on villains.

AJ McLean and partner Cheryl Burke are set to dance the Cha Cha to “Larger Than Life” by Backstreet Boys and “is actually getting the other Backstreet Boys involved in the performance in a very COVID‑safe way,” executive producer Andrew Llinares said on Wednesday.

Another emotional performance will be done by Disney Channel alum Skai Jackson, who is partnered with Alan Bersten. The pair will dance the Foxtrot to “Ordinary People” by John Legend in a tribute to the late Cameron Boyce, who was a close friend of the actress. Boyce died in 2019 after suffering an epileptic seizure. He was 20.

For more on DWTS, including exclusive cast interviews, listen to the podcast below and subscribe for more exclusive TV news and interviews.