Derek Hough: My ‘Tough’ ‘DWTS’ Criticism Is Out of’ Respect’ for Contestants

Derek Hough is having fun as a Dancing With the Stars judge, but he’s looking to contribute more than just filling a seat in the ballroom.

‘Dancing With the Stars’ Season 29: Everything We Know Read article

The former Dancing With the Stars pro, 35, exclusively told Us Weekly on Friday, October 2, while discussing his participation in Frank’s RedHot Thick Sauce #DippingDanceChallenge that fans told him he’s gotten “tough” with his critiques.

“I was like, ‘Was I?’ It’s so funny,” Hough explained. “I had no intention to be tough or anything like that, but I guess what I realize, for me, is that I think I just have a lot of respect. I have a lot of respect for these celebrities and what they’re doing and I genuinely want to give them some feedback. ‘Cause I know for me when I was a pro, I wanted actual feedback. I want to learn how to be better. So that’s what I’ve always wanted to do.”

The dancer noted that he will “never be mean” while delivering critiques, but he’s not afraid to be “tough” for the sake of helping contestants improve. 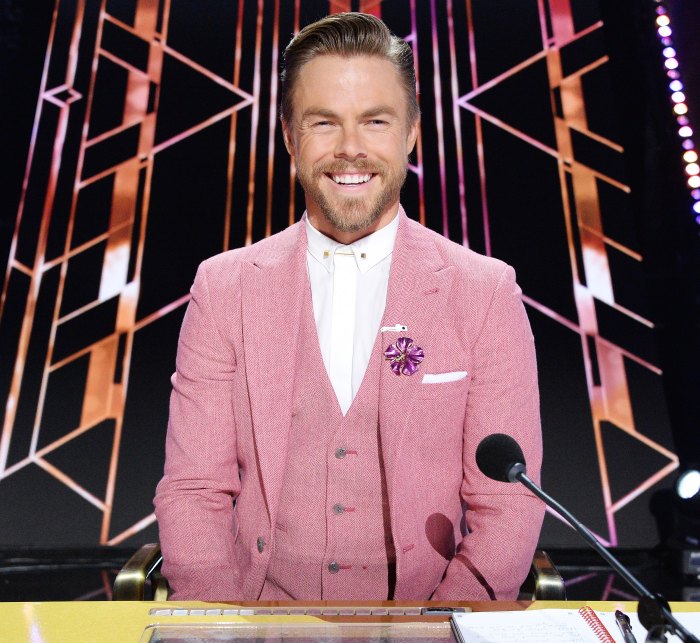 “I will be honest on certain things because my intention is I really, genuinely want them to be better,” Hough explained.

The Hairspray Live! star added that his biggest “growing pain” as a judge is “trying to get things in quickly” due to the time constraints.

Hough announced in September that he would be joining the Dancing With the Stars judging panel for season 29, alongside Carrie Ann Inaba and Bruno Tonioli.

While the ABC personality has been tackling his new role as a judge, his personal life has been smooth sailing. Hough told Us that things are going well with his girlfriend, Hayley Erbert, but they aren’t rushing into an engagement.

“For us it’s, like, we’re happy, we’re taking our time and we’re enjoying where we’re at and, you know, the day shall come,” he said.

The couple — who began dating in 2015 — have been enjoying spending time together amid the coronavirus pandemic. Hough and Erbert, 25, even started a YouTube channel, Derek & Hayley x Dayley Life.

“She started cooking and I was like, ‘Well, let me cook with you, babe,’” he said. “And I’ve never done that. I’ve never been in the kitchen cooking. We’ve created new rituals together where we cook together. I clean the dishes. We just do more things together at home. And it’s just a blast to get closer together.”

The pair will also dance together — his first time performing on the show in three years — later this season.

“I’m just putting those dance moves on tape a little bit and sharing them with everybody and encouraging people,” he told Us on Friday. “That’s the thing too. In anything and everything I do, my whole M.O. is to encourage people to move, you know, to get people moving, get people having fun. And that’s the other thing too is, having some fun, having some joy, having some light right now, I think that — as simple as something like dancing in the house for no apparent reason — to me is important, especially given the time [amid the coronavirus pandemic]. It just brings some joy and a change of that mood, and the fastest way to do that is by dancing. By moving.”

Read More: Derek Hough: My ‘Tough’ ‘DWTS’ Criticism Is Out of’ Respect’ for Contestants