Jokes for days! Demi Lovato is finding the humor in her broken engagement to ex-fiancé Max Ehrich.

While hosting the People’s Choice Awards on Sunday, November 15, the “Sorry Not Sorry” singer shared her experience being in quarantine throughout 2020 in a hilarious opening monologue — and didn’t shy away from cracking a joke about her broken engagement.

“Honestly, this year has been the longest three years of my life. Don’t get me wrong, it started out amazing. I performed at the Grammys and sung the National Anthem at the Super Bowl. But then COVID hit, and everything shut down. So, I did what everyone else did: I went into lockdown mode, and got engaged,” the 28-year-old explained. “Got into painting, photography, meditation, tested the limits of Postmates Unlimited.” 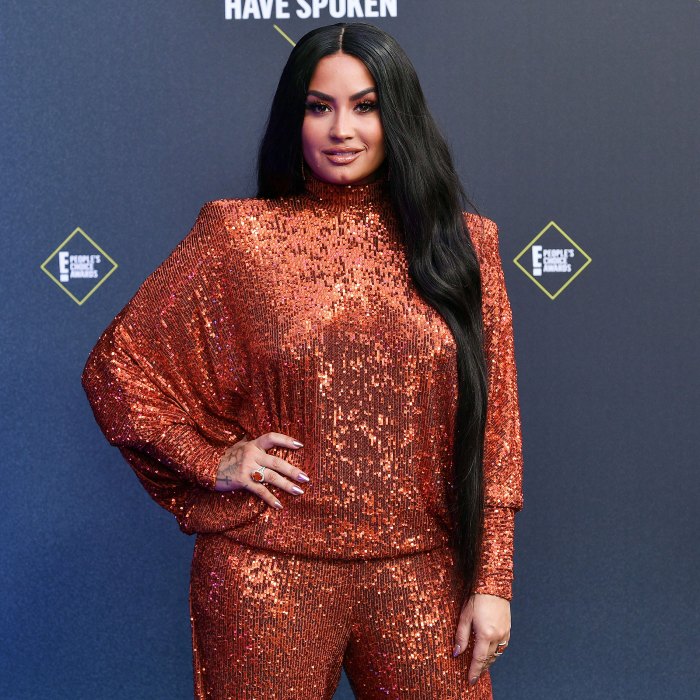 Lovato continued, “I also didn’t know this could happen, but I reached the end of Instagram four times. I binged seven seasons of Pretty Little Liars, got unengaged and then I went looking for aliens in the desert. So, basically the same as everyone else.”

Us Weekly confirmed on September 24 that Lovato and Ehrich had called off their engagement. Lovato released a song about the split shortly after called “Still Have Me,” while Ehrich wrote his own track titled “Afraid.”

In March, Us broke the news that the Grammy nominee was dating the Young and the Restless alum. They announced their engagement in July.

The twosome were in a seemingly solid place in August but still not in a rush to get married. “There is no explicit timetable for the wedding just yet,” a source told Us at the time. “They’re happy to be committed to one another and to start the next chapter of their lives.”

Lovato and Ehrich also hadn’t had conversations about starting a family “in a serious way,” but they wanted to become parents in the future.

In early September, the songstress hinted earlier this month that they might skip a big wedding altogether. “The thing is with the [coronavirus] pandemic, it’s, like, on one hand, I would love to elope because my life is so public, and I want to keep it sacred between me and him,” she explained on PopCrush Nights. “On the other hand, I want my friends and family to be there for a celebration, but I can’t do that until the pandemic’s over because it’s not safe.”

She added: “It’s all this planning. But I have my image for what I would want it to be if I got to do a big celebration.”

The Sonny With a Chance alum recently shared what she has learned in 2020 following the pair’s breakup. “I think the most important thing that I’ve learned is how much I am OK with myself and loving myself,” she said on Today With Hoda & Jenna on November 12. “It wasn’t until this year that I really started exploring the things that bring joy to my life in little ways.”