Sign of the times. Colin Jost and Michael Che opened up about how Saturday Night Live kept the laughs coming for the show’s first in-person table read amid the coronavirus pandemic — from a safe distance.

The Saturday Night Live stars appeared on the Thursday, October 1, episode of The Tonight Show Starring Jimmy Fallon to explain how the rehearsal operated with new COVID safety protocols.

“How’s it like working six feet apart from each other?” host Jimmy Fallon asked, to which Che, 37, replied, “I love it! I owe a lot of people money. Nobody can get it from me. It’s perfect.”

Jost said it was hard to distinguish people’s voices during the table read, which made the rehearsal more complicated than usual.

“We have 20 cast members in our show right now, and they have to be six feet apart,” the How to Be Single star explained. “So 20 times six is, uh, probably like 1,000? I don’t know. So, you’re in a table read and you’re hearing voices and you’re like ‘Who said that?’” 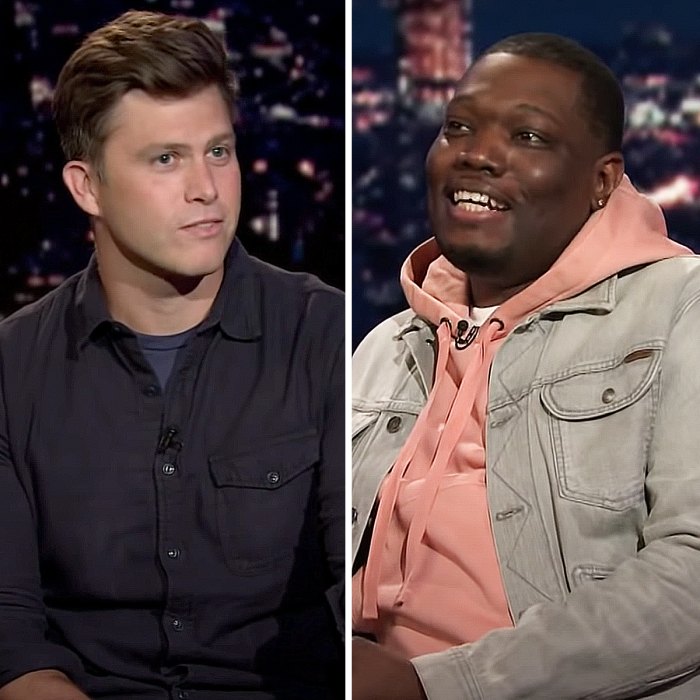 Che added, “Yeah, it feels like you’re listening to a podcast. You don’t see anybody! It’s great.”

Saturday Night Live will return on Saturday, October 3, for its first live episode since the pandemic started. The season 46 premiere will feature host Chris Rock, musical guest Megan Thee Stallion, and Jim Carrey and Maya Rudolph making guest appearances as Joe Biden and Kamala Harris, respectively. The episode will have a live audience that will be given COVID tests prior to the show and required to wear masks.

Fallon asked the Saturday Night Live writers what the audience will look like, to which Che joked, “White. Historically, they’re all white. I don’t know if you’re a fan, but …”

In August, Jost opened up about another challenge he had to face during his time on SNL — facing trolls. The Staten Island Summer star told Seth Meyers during the 92Y virtual talk that he battled depression after he was criticized for taking over as coanchor on “Weekend Update.”

“I felt depressed that I just felt like I was failing at it,” he recalled. “That was the hardest part. And I didn’t quite know how to not feel that way or how to get out of that feeling.”

Jost added, “It’s hard and there’s no way of getting better at it other than doing it more. There’s no other place you can go to practice doing a live Weekend Update. There’s nothing like it.”