Ready for a new chapter. Jax Taylor and Brittany Cartwright shocked Bravo fans after announcing that they wouldn’t be back for Vanderpump Rules season 9 — but the decision was a long time coming.

The bartender, 40, and the Kentucky native, 31, confirmed via Instagram on Friday, December 4, that they were exiting the reality series. Taylor was one of the show’s original cast members. Cartwright joined in the fourth season in 2015, two years before the couple scored their own spinoff series, Jax and Brittany Take Kentucky. 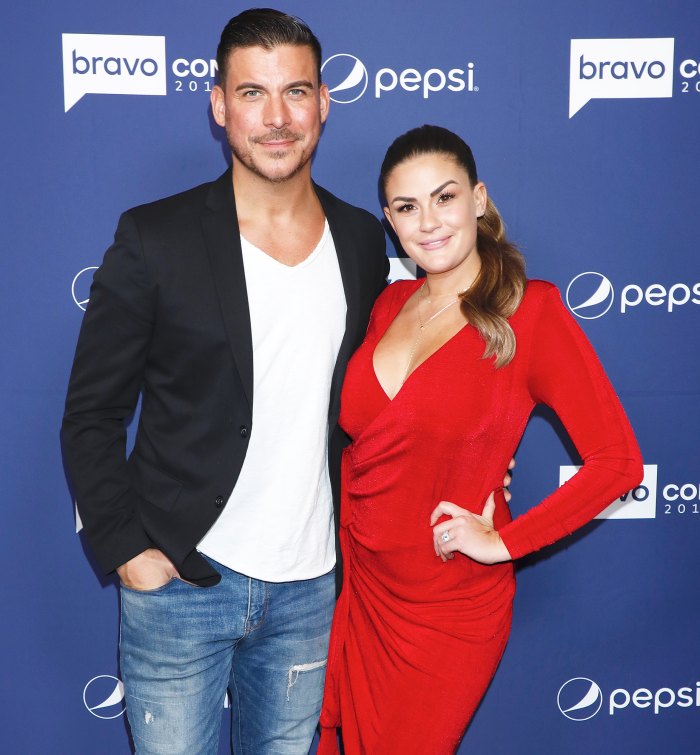 Three months before news of their Bravo exit made headlines, the pair announced that they are expecting their first child together, a baby boy. The duo tied the knot in June 2019 and are ready to make their little one their first priority as they head into the next phase of their lives.

“Jax and Brittany want to focus on their family and their new journey,” a rep for the pair tells Us Weekly. “They are very excited for their son and they have some projects they are working on that allow them to share their own lives without Bravo’s limitations.”

Taylor and Cartwright shared identical statements upon confirming that they were leaving Vanderpump Rules, calling their time on the series “some of the most challenging, rewarding and fulfilling years” of their lives. “We are excited to take this time to focus on our growing family and share with you our new endeavors. @bravotv, @evolutionusa and our Vanderpump castmates will always remain close to our hearts,” they wrote. “Thank you to all the fans who have shared our journey with us and supported us through everything. We love you.” 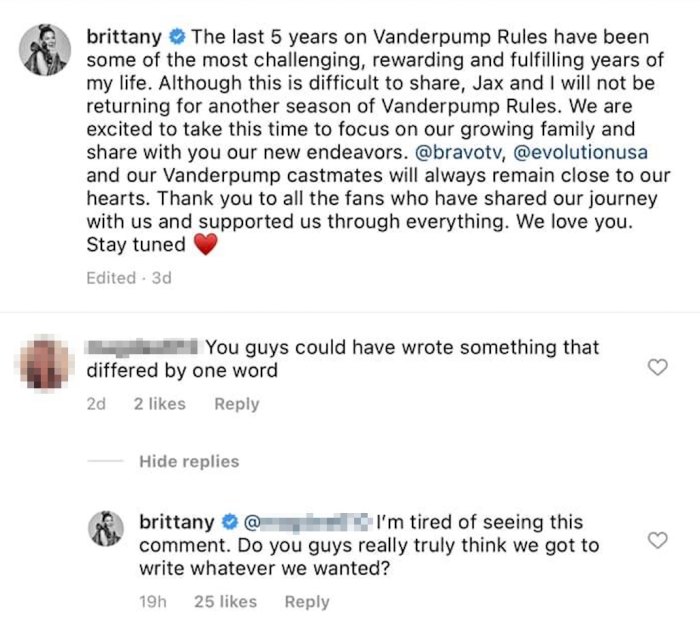 Fans were quick to notice the similarities in the couple’s announcements — and Cartwright hinted that they weren’t given the freedom to construct their own goodbyes.

“I’m tired of seeing this comment. Do you guys really truly think we got to write whatever we wanted?” she replied to one Instagram user, sparking speculation that the network had a hand in crafting their statements.

Taylor previously told disappointed fans that it “doesn’t make sense” for him and his wife to be on the series anymore. “I am 41 with a baby on the way … was the best choice for my whole family,” he said on Friday.

‘Vanderpump Rules’ Season 9 Production Remains Up in the Air: What We Know Read article

The pair’s exit comes in the wake of Stassi Schroeder and Kristen Doute‘s firings in June. The women were accused of falsely reporting former costar Faith Stowers to the police in 2018 for a crime she didn’t commit. At the time, Bravo fans resurfaced some of Taylor’s old tweets accusing Stowers — the series’ sole Black cast member — of the same crime. Max Boyens and Brett Caprioni were also axed from the show this summer for their past racist actions.