Becca Kufrin seems to have thoughts about her ex-fiancé, Garrett Yrigoyen, moving on with Alex Farrar less than two months after the former Bachelorette star confirmed their split.

“Sunday lesson,” the 30-year-old captioned an Instagram Story post on Sunday, November 1, as she shared a quote from We the Urban’s account. “Be mindful of how you react to people when you feel disrespected.” 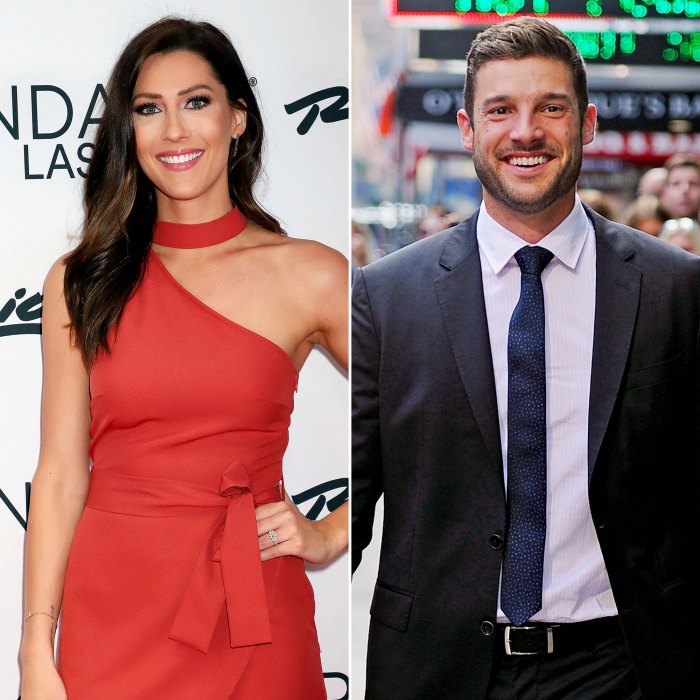 The Minnesota native’s post came hours after Yrigoyen, 31, went Instagram official with his new flame, sharing two photos of the pair’s visit to a pumpkin patch.

“Happy Halloween,” he captioned the snaps on Saturday, October 31. “Picked up a special pumpkin at the patch.”

The medical sales rep hinted at his new relationship status in the comments section of the post when a friend wrote that they were “impressed by the girl, but not the pumpkin. I feel like you could have done way better …” and asked if the yoga instructor knows “what she’s getting herself into.”

“Hahah she hasn’t met you guys yet, so no,” Yrigoyen replied.

The pal joked, “She might realize she could have done better too… haha,” prompting the former reality TV star to write back, “Haha damn you, you’re right though.”

Farrar also chimed in, writing, “Bring it on.”

Yrigoyen’s new romance comes a month after Kufrin confirmed that the pair had ended their engagement two years after they met of season 14 of The Bachelorette.

“With a heavy heart, Garrett and I have come to the loving conclusion to end our engagement,” she wrote in an Instagram post on September 1. “All that we will share is that we still have nothing but love and respect for one another even though we’ve decided to go down our own separate paths. While we’ve arrived at this point, it doesn’t diminish the countless, amazing memories made together. We hope that everyone can allow us grace, respect and the time to heal our hearts as we navigate this next chapter in our lives.”

A source told Us Weekly in September that Kufrin was “really broken up” about the split and had “thought Garrett was her person, her forever.”

Speculation that the pair had gone their separate ways began in June after Yrigoyen made comments in support of police amid the Black Lives Matter protests.

Earlier this month, a social media user suggested that Kufrin’s political beliefs were the “real reason he left” after she voiced her support for Democratic presidential candidate Joe Biden. “It’s a shame this is the sentiment that people resort to,” she replied.

Yrigoyen appeared to touch on their differences of opinion in an Instagram post on Friday, October 30, when he revealed that he’d voted in the election.

“I think a large percentage of people are scared to vote because [of] the nastiness of the political climate,” he wrote. “Most people don’t like conflict and get pressured through family, friends, & relationships to vote a certain way. They think if they don’t vote the same way that they will be hated or a relationship will fall apart. In a lot of instances they do, because it’s the nature of the beast when small minded people don’t understand that there is a lot more to life than politics (but it is an important part).”

Kufrin dressed as late Supreme Court justice Ruth Bader Ginsburg for Halloween the following day, sharing two photos of herself along with the caption, “I Dissent.”