Sugar, spice and everything nice! Kylie Jenner and her daughter, Stormi, filmed the most adorable baking tutorial ahead of Halloween.

While wearing matching orange Peanuts pajamas, the Keeping Up With the Kardashians star, 23, and the 2-year-old teamed up in the kitchen to make sugar cookies shaped and decorated like pumpkins, ghosts, bats and skulls in a YouTube video posted on Monday, October 5. 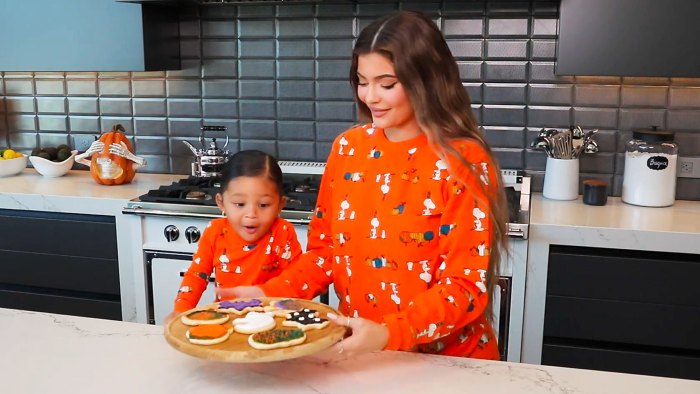 “Let’s make cookies again!” Stormi exclaimed after Jenner reminded her that they baked Christmas treats together in December 2019.

The little one helped stir together the ingredients while her mom used a hand mixer. “I love how excited you are about the cookies,” the Kylie Cosmetics CEO said while snuggling her daughter.

As the mother-daughter duo put frosting on the sweets, Stormi revealed that she is going to dress up as a Minion from Despicable Me for Halloween.

After the reality star and her daughter finished decorating, Stormi adorably suggested that they give the cookies to her cousin True, Khloé Kardashian’s 2-year-old daughter with Tristan Thompson.

The businesswoman uploaded the YouTube video shortly after she and Scott, 29, got into the fall spirit by taking their daughter to a pumpkin patch. She documented the outing on her Instagram Story, sharing photos of Stormi riding a tractor and posing in a field of flowers with the “Sicko Mode” rapper.

Jenner and Scott split in October 2019 after two years together, but a source exclusively told Us Weekly in September that they “definitely still have a physical attraction to one another and are on pretty good terms.” They also have not written off the possibility of having more children together one day, according to the source: “Kylie definitely wants more kids; she’s just not sure about if it will be with Travis.”