A meaningful moniker! Tenley Molzahn and her husband, Taylor Leopold, considered multiple names for their daughter.

“We had three names that we had kept a secret from EVERYONE and one name that was definitely in the lead,” the Bachelor alum, 36, captioned a Tuesday, October 6, Instagram post. “But the week of her due date, Taylor had come home from a sunset surf and said, ‘What do you think of the name Rell?’ Right away, I lit up and said, ‘I LOVE IT!’ And that immediately moved two names off the list and Rell and the other (still a secret) became our frontrunners.”

The former reality star and Leopold wanted to wait to meet the little one before choosing, ultimately picking Rell James.

Yesterday was 2 Weeks as a family of 3! 💕 I already want time to slow down!! — I also wanted to say a HUGE thank you to all of you that are so incredibly positive an supportive. Thanks to those share sweet & kind words of encouraging, cheering us new parents on, and praying for the best for us! 😘

“[Leopold] knew of the name because of the late Rell Sunn,” the Oregon native went on to write. “She was a legendary female surfer in Hawaii and was known for her joy and light in her community and the surf world. Characteristics we have been praying over our little love since we learned we were pregnant! So her name was inspired by Rell Sunn!”

As for the infant’s middle moniker, she is named after both of her grandfathers. “We’ve had her middle name planned long before we found out we were having a baby!” the former ABC personality concluded her caption.

She and her husband became parents last month. “We’ve been completely captivated & swept off our feet in love with our precious baby girl,” the Bachelor in Paradise alum captioned her daughter’s Instagram debut. “We are soooo in love, she’s absolute perfection.”

The baby news came six months after Molzahn revealed she was pregnant with her first child. 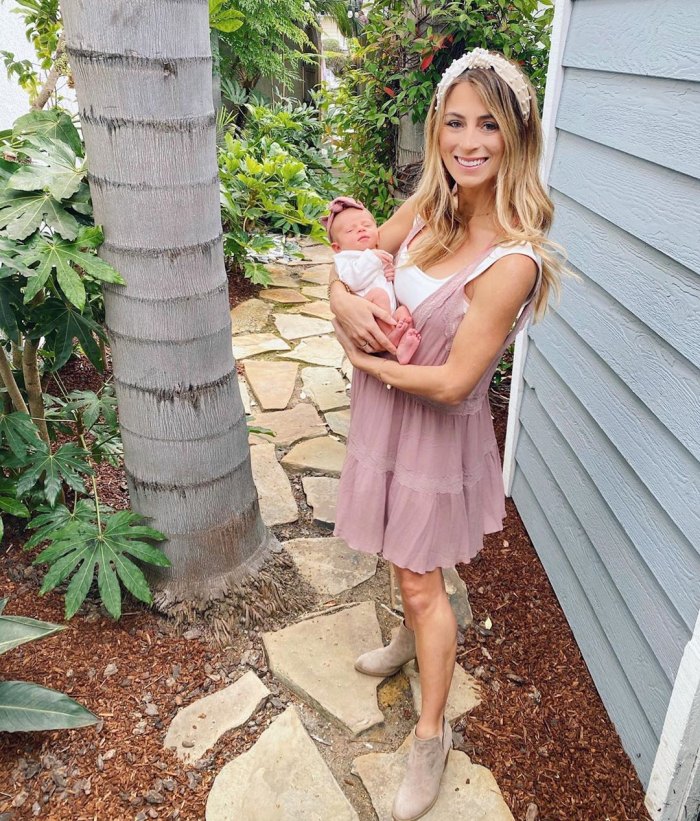 Since becoming a mom in September, the former dancer has already dealt with “brutal” mom-shamers. “I knew it was a thing, and I was prepared to be presented with it — but it’s NASTY,” she captioned a Saturday, October 3, Instagram post. “I can actually hear the judgements right now with this photo because you can’t see my baby’s nose and mouth. … I don’t ever want to have to defend myself on people’s assumptions — they are assumptions. And I don’t want the negativity or the shaming to steal our joy. And really, shame on those who shame others.”

Molzahn competed on season 14 of The Bachelor in 2010, followed by Bachelor Pad and Bachelor in Paradise. She wed Leopold in April 2018 in San Marcos, California.