On Tuesday, December 8, the former Bachelor contestant, 30, took to her Instagram Story to share a photo from Thanksgiving with her husband, Chris Lane. “Trying to hide the belly,” she captioned the pic, in which she slyly posed with her arm covering her midriff while facing Lane, 36. 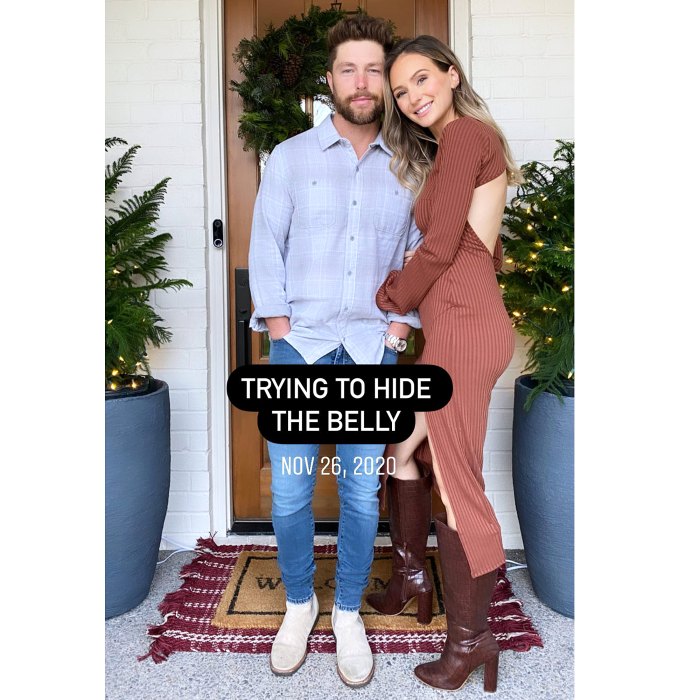 In a second Instagram Story post from that same day, Bushnell shared a video of herself rubbing her bump. “Baby was really making an appearance on Thanksgiving,” she wrote. “And this was pre-stuffing and turkey 🙀.”

Sharing a selfie where she laid her hand above her bump, the Oregon native then detailed how she has been coping amid her pregnancy so far.

“Today! Finally feeling better over the last few weeks and [I’ve] been able to sneak in 15-20 minute daily workouts,” the mom-to-be shared alongside a pic of herself dressed in athleisure. “Feels so good to not be a couch potato anymore.”

Bushnell added that her first child is “due beginning of June.”

On Sunday, December 6, Bushnell and Lane revealed that they are expecting their first child together. At the time, the couple both shared the same video of their ultrasound. 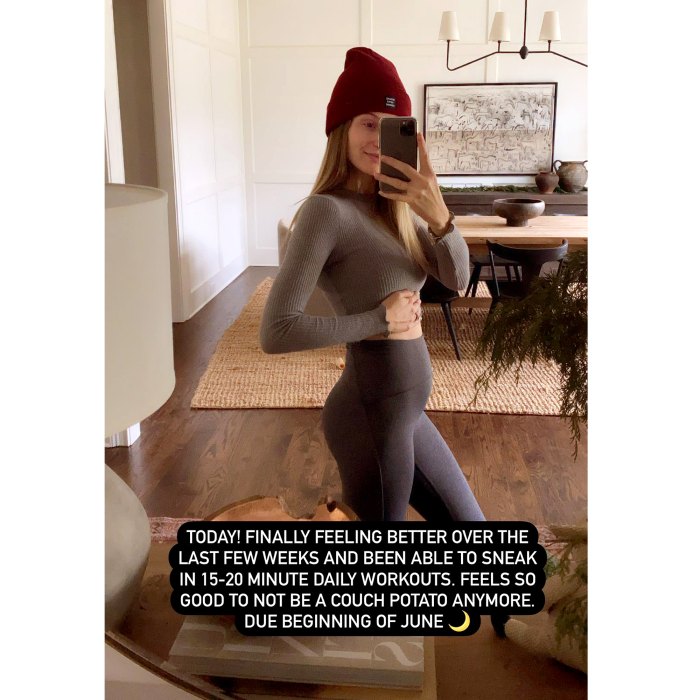 “A dream ☁️ Except I’m not dreaming. I’m wide awake. Holding your dad’s hand, watching you dance around in my belly. Listening to your little heart beat,” the reality star captioned her post. “My new favorite sound. A miracle. New life. Our sweet baby. Thank you, Jesus! All the glory belongs to you 🙏 .”

The “Big, Big Plans” crooner noted in his post that “prayer works,” adding: “Hope you look like your Mama 🙏🏻 @laurenlane.”

The duo received congratulatory messages from several people, including Bushnell’s former fiancé Ben Higgins. The pair met and got engaged during season 20 of The Bachelor, which aired in 2016. They split in May 2017.

“Congrats!” the Indiana native, who is engaged to Jessica Clarke, commented on Bushnell’s post. “What a thing to celebrate!”

Bushnell and Lane tied the knot in Nashville in October 2019. On the one-year anniversary of their engagement, the former flight attendant shared her excitement about starting a family with the “Take Back Home Girl” singer.

“We got engaged about a year ago and y’all, I don’t know what I did to deserve this man,” she captioned the emotional post in June. “About to get personal, but I am very excited to start a family and get asked when we are having kids ALL the time, but it just hasn’t happened yet.”