Six days after having his right leg amputated amid a decades-long battle with lymphedema, Cam Ayala opened up about what’s next for his health and personal journey.

“My short-term and long-term goals haven’t changed from what they were from when I first went on the show,” the Bachelorette season 15 alum said exclusively on Us Weekly’s “Here for the Right Reasons” podcast. “I’d love to get married, be a husband and then eventually be a father. Whether that’s having kids naturally or adopting or surrogates, it’s in my DNA. It’s in my heart that I do wanna be a father. I do wanna be a husband. So I would love [if] that happens sooner rather than later, but I’ve also leaned really heavily into my faith and know that that’s all in God’s time of when that’s supposed to happen and who that’s supposed to happen with.” 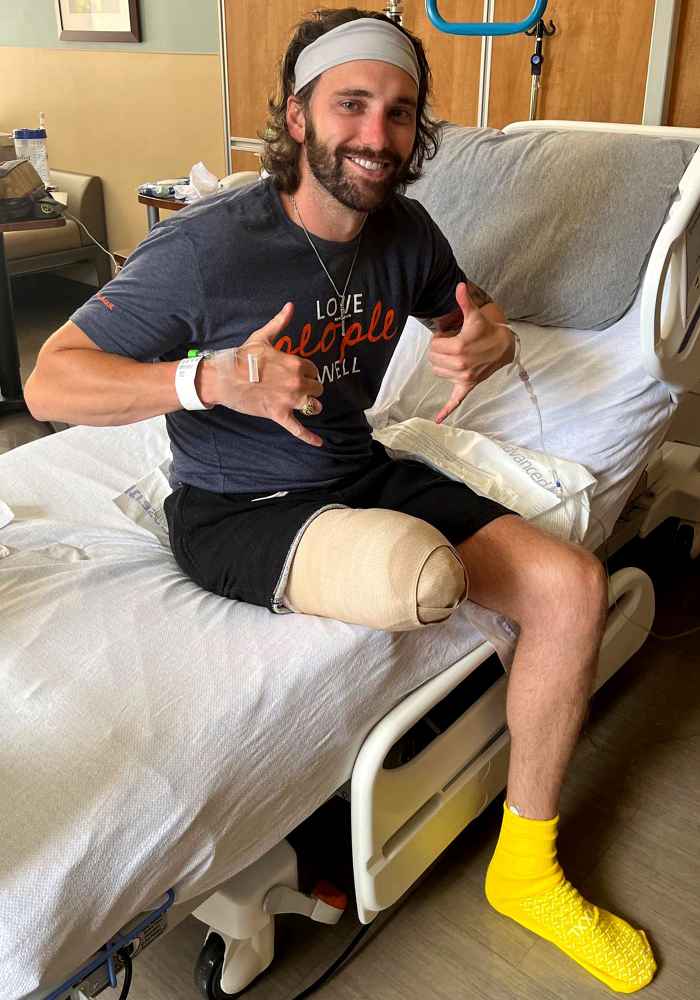 He continued: “I’m not putting as much pressure on that. And obviously, I haven’t been, like, openly dating since I’ve been so hyper focused on getting myself mentally and physically and emotionally prepared for the surgery, which I just underwent.”

Ayala was diagnosed with lymphedema at age 11. He underwent 16 leg surgeries — including a total knee replacement in 2021 that wasn’t “done properly” — before his above-the-knee amputation procedure on June 22.

“It was scheduled to be about a three to four-hour procedure because the procedure itself is relatively straightforward,” he explained. “They have the orthopedic oncologist who kind of just comes in and makes the cut. And then if you’re lucky, they have a really good plastic or vascular surgeon to come in behind him or her and then basically close up the wound and do any other type of, you know, nerve or venous type of surgery to make sure everything heals as properly as possible.”

“It was a long time to be under and it was a pretty major surgery, not just because of the lifestyle adjustment, but because of the intricacy and the amount of, like, surgical work that the plastic surgeon had to do after the amputation was completed,” he told Us.

While the surgery was successful, Ayala’s health journey is far from over as there’s no cure for lymphedema.

“Think of it like you have bad plumbing, bad pipes in your house, so it gets backed up. The water starts to rise up in the toilet or in the sink, wherever the flooding is. And then in that case, like for my leg, because that fluid doesn’t move properly, it just kind of grows stagnant and accumulates there in my knee joint and gets bigger and bigger and swollen,” he explained. “So that’s why wearing those compression garments and using a compression pump was necessary to help move that fluid, make it go upstream because it naturally is trying to go downstream. So just because they remove most of my leg above the knee, doesn’t mean that all my lymphatic vessels are healed and cured. There’s still gonna be some swelling in my residual limb.”

Ayala, who works for the Lymphatic Education & Research Network, will continue rehab and get fitted for a prosthetic leg.

“It’s all about physical therapy and rehab, having the wound heal, getting fitted from my prosthetic leg, learning how to walk again, learn how to jog again, learn how to fight again, and then just learn how to have a new normal,” he said. “And I think in that journey and in that process, if it’s supposed to happen, then my person who will come along, won’t see me as a burden but will see me as a blessing and will be able to build our lives together and raise children who will be very sympathetic and empathetic to those with disabilities.”