Round three! Jade Roper gave birth on Saturday, November 14, to her and Tanner Tolbert’s third child.

“5:33 AM,” Tolbert wrote via his Instagram Story on Saturday. “Mama and Baby Boy doing great!” Earlier in the day, he shared videos of Roper in an inflatable pool in their bedroom, preparing for the home birth.

The Bachelor alum, 33, announced in May that she and the Missouri native, also 33, were giving their daughter, Emerson, and their son, Brooks, a younger sibling. 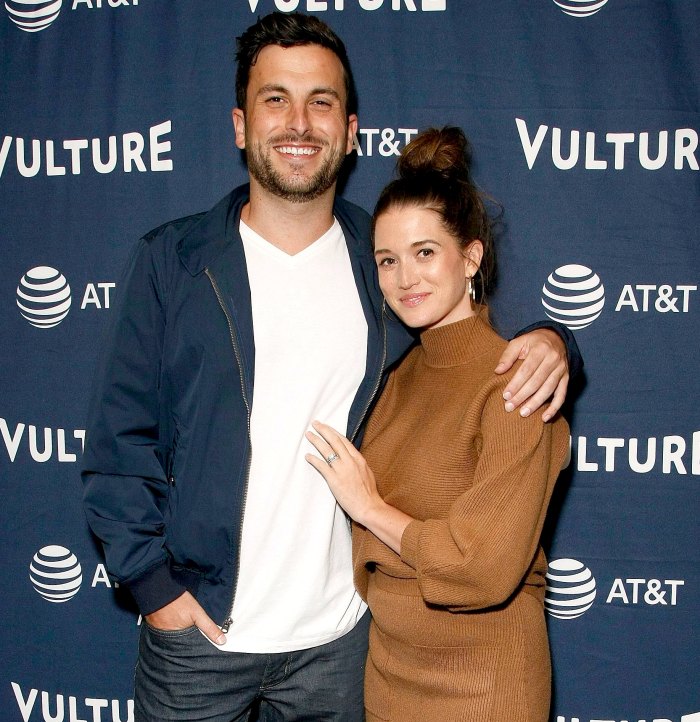 “HERE WE GROW AGAIN!” the “Mommies Tell All” podcast cohost captioned an Instagram family photo at the time. “It feels so good to be able to finally talk about this pregnancy! If you noticed I haven’t been on social media much the past couple of months, it’s because I was dealing with terrible nausea and fatigue, on top of taking care of two kiddos during [the coronavirus] pandemic. Although this time has its uncertainties, we are so thankful and excited for this baby. I truly believe babies being born during this time are here for a special reason, to be light workers.”

As for the Bachelorette alum, he shared the news with a picture of himself cradling a fake baby bump while wearing a dress. “Figured it was only fair if I carried this one,” Tolbert joked.

Two months later, the former reality stars revealed the sex of their baby-to-be with the help of blue powder and foam, telling E! News: “Emmy, Tanner and I all were all putting our bets on a girl, but this is truly such a fun and happy surprise! It may take a while for Emmy to call the baby brother though. She is still referring to him as sister.”

The Bachelor in Paradise alums tied the knot in January 2016 in California and welcomed their first child the following year. Brooks arrived in July 2019 in an emergency home birth in the couple’s master closet.

Roper believes that baby No. 3 will be their “last,” she wrote via Instagram in June. “[I want] to soak up every moment (laughing at myself when I say this cuz our kids keep us crazy busy lol) and document everything since it’ll be the last of the firsts,” the Colorado native captioned a mirror selfie at the time.

Tolbert revealed their pregnancy was “not planned,” and he was previously “content” with having two kids. He explained on Roper’s Instagram Story in May: “But now this happens, so we’re gonna have three. I’m like, ‘What’s the difference between three and four?’”