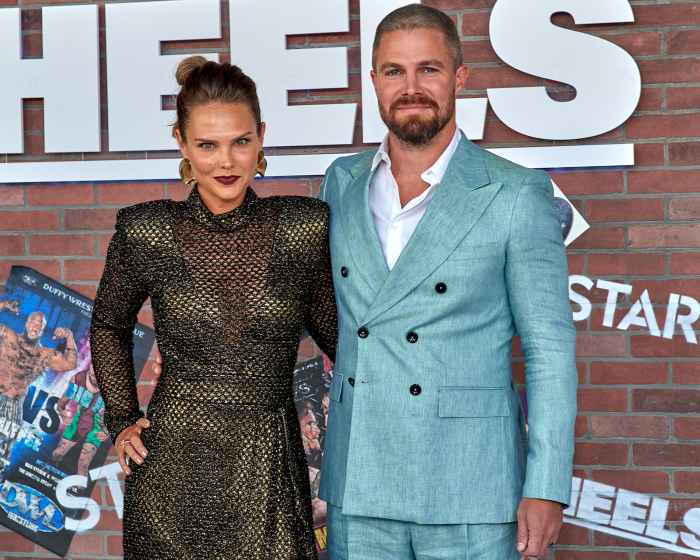 Another cutie for Stephen Amell! The Arrow alum and his wife, Cassandra Jean Amell, have reportedly welcomed their second child together.

People reported on Saturday, June 11, that the married couple — who wed in 2012 — secretly welcomed Baby No. 2 last month in Los Angeles. TMZ was first report the news, noting that Stephen, 41, and Cassandra, 36, are proud parents to newborn daughter Bowen.

The Heels actor previously announced in October 2013 that the twosome welcomed their first child, daughter Maverick.

“She came just in time for Amell Wednesdays,” the Canada native wrote via Facebook at the time, sharing a snap of himself holding his little girl in the hospital room while The Tomorrow People — starring his cousin Robbie Amell — aired on television.

Stephen and the former America’s Next Top Model contestant continued to balance parenting their little girl amid their busy acting careers before he decided to end his run as the Green Arrow/Oliver Queen after 8 seasons on the DC Comics TV show.

“A large part of this decision [to end the CW show] is because I’m now a father and a husband and a lot of my life and interests don’t really reside in Vancouver anymore and thinking that’s the best thing for me personally and professionally,” the Heels actor explained in a March 2019 Facebook Live interview, ahead of the January 2020 series finale.

Stephen later opened up exclusively to Us Weekly about his time in the Arrowverse and how it correlated to his early courtship with the Texas native.

“When I got the job as Green Arrow/Oliver Queen, I was at a really interesting point in my life. I was dating a young lady who’s now my wife,” he previously told Us in August 2021. “I was ready for that opportunity. You’ve got to believe that there are forces in the universe that are working that you’re not aware of.”

The couple’s relationship made headlines late last year after Stephen was escorted off a plane in June following an alleged altercation with Cassandra.

“I had too many drinks in a public place, and I got on a plane,” the Vampire Diaries alum explained during an August 2021 appearance on the “Inside of You with Michael Rosenbaum” podcast. “I was pissed off about something else that had nothing to do with Cass, my wife, and I picked a fight. Just I picked a fight because I wanted to be loud and upset.”

He added: “My wife said one thing the entire time. If you don’t lower your voice, they’re going to ask you to get off the plane.’ … I referred to it as an argument between my wife and I. It was not an argument. This is 100 percent my fault. I feel like I went the better part of 10 years without being an a–hole in public. I was an a–hole in public.”