Next step: I do? Dakota Johnson sparked speculation that she’s engaged to boyfriend Chris Martin after nearly three years together.

The 31-year-old High Note star was seen sporting a huge emerald ring while shopping in West Hollywood earlier this month. Photos published by The New York Post‘s Page Six on Monday, December 14, show the jewel on Johnson’s left ring finger as she chatted on her phone. The Texas native kept her outfit casual, donning a dark fur coat and black face mask amid the coronavirus pandemic.

Us Weekly confirmed in December 2017 that the Fifty Shades of Grey star and the Coldplay singer, 43, were dating after they took a romantic trip to Israel together. Martin was previously married to Gwyneth Paltrow, with whom he shares daughter Apple, 16, and son Moses, 14. The former couple tied the knot in December 2003 and announced their “conscious uncoupling” in March 2014. Their divorce was finalized two years later. 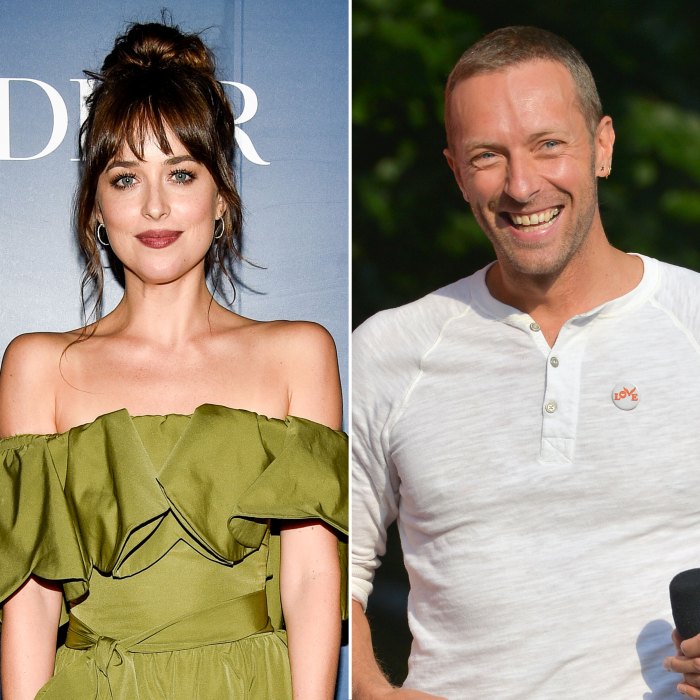 Throughout their relationship, Johnson and the “A Sky Full of Stars” crooner have kept things relatively private. During a September 2018 interview with Tatler, the Peanut Butter Falcon actress briefly opened up about her romance, admitting that she was “very happy” with Martin.

Spicing It Up! See the 11 Hottest Onscreen Kisses Ever Read article

The pair briefly spent time apart in mid-2019 but their chemistry was too strong to stay broken up. By August 2019, the duo had reconciled. At the time, a source told Us exclusively that “Gwyneth is the one who pushed them” to get back together.

Paltrow, 48, moved on with Brad Falchuk following her split from the Grammy winner and the duo wed in September 2018. While the Politician actress and Martin have remained close in the years since their divorce, navigating their coparenting relationship hasn’t always been easy.

“Chris and I committed to putting [the kids] first and that’s harder than it looks because some days you really don’t want to be with the person that you are getting divorced from,” Paltrow said on The Drew Barrymore Show in September. “But if you’re committed to having family dinner, then you do it. You take a deep breath, and you look the person in the eye, and you remember your pact, and you smile, and you hug and you recommit to this new relationship that you are trying to foster. … I really wanted my kids not to be traumatized, if it were possible.”