Another One! April Love Geary and Robin Thicke Welcome 3rd Child Together

Three under 3! April Love Geary gave birth to her and Robin Thicke’s third child together on Friday, December 11.

“My Luca Patrick, you are so perfect,” Geary captioned a photo of herself holding her newborn son via Instagram. “Mommy & daddy love you so much.”

Us Weekly broke the news in September that the model, 26, was pregnant with baby No. 3. She and the Masked Singer judge, 43, are also the parents of daughters Mia, 2, and Lola, 9 months. Thicke shares son Julian, 10, with his ex-wife, Paula Patton. 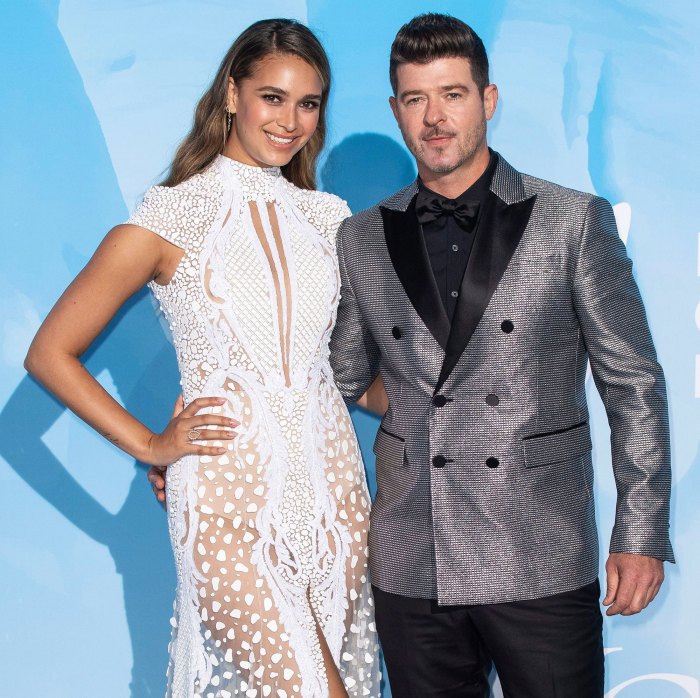 The following month, the California native confirmed her pregnancy news with an Instagram baby bump debut. “Sorry we can’t hang out, there’s a pandemic and I’m pregnant … again,” Geary captioned a bikini photo in October. “We love consistency.”

The pregnant star went on to explain why she thinks she and the “Blurred Lines” singer are done expanding their family. “With Julian, it’ll be four total and I love even numbers,” she wrote on her Instagram Story.

As for whether this was a planned pregnancy, Geary said no, but they “decided to roll with it.”

In August 2018, she opened up about conceiving their second child while on the pill. “I started birth control and then one morning I woke up nauseous,” she wrote via Instagram at the time. “My doctor is amazing and says everything looks perfect right now. I wanted to have them be close in age but it just happened to be very close in age haha.”

She and the Canadian star started dating in 2014 and got engaged four years later. “YES YES 1000x YES,” the bride-to-be captioned her Instagram reveal in December 2018.

Geary has previously clapped back at criticism against her and the Grammy nominee having children ahead of their wedding, saying, “It’s not the 1950’s. Women don’t NEED to get married before having babies. Ya’ll need to chill.”

She has also bashed the parenting police for commenting on her decision to feed Mia Hot Cheetos in June 2019, as well as her racy Valentine’s Day Instagram tribute to Thicke in February.

“Oh no my poor kids will have to see this picture when they’re older … hoes they’re 1 and 2,” Geary replied to comments on the lingerie photo. “You really think THIS INSTAGRAM PIC will still be NEWS by the time they have a cell phone? Laughing my ass off. Also, Mia was in my closet with me while I was getting dressed.”