Always in his heart. Anne Heche’s eldest son, Homer, spoke out about her death following her fatal car crash.

“My brother Atlas and I lost our Mom. After six days of almost unbelievable emotional swings, I am left with a deep, wordless sadness,” the 20-year-old said in a statement to People on Friday, August 12. “Hopefully my mom is free from pain and beginning to explore what I like to imagine as her eternal freedom.”

Homer — whom Heche shared with ex-husband Coleman Laffoon — continued by thanking everyone who sent love and words of kindness to late actress’ family following the car accident one week prior. 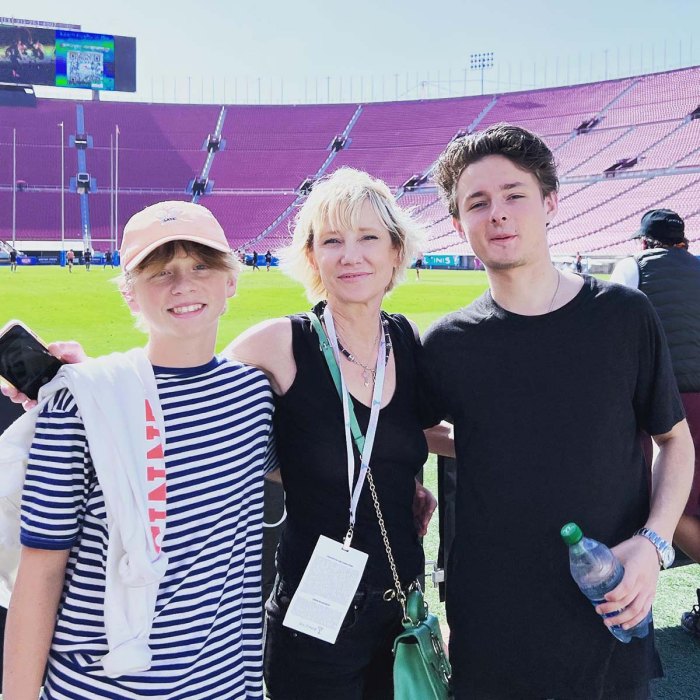 “Over those six days, thousands of friends, family, and fans made their hearts known to me,” he continued. “I am grateful for their love, as I am for the support of my Dad, Coley, and my stepmom Alexi who continue to be my rock during this time.”

He concluded: “Rest In Peace Mom, I love you.”

Us Weekly confirmed on Friday that Heche was pronounced dead after being left comatose from her August 5 car accident.

“Anne is legally dead according to California law,” a rep for the Ohio native told Us. “Her heart is still beating and she has not been taken off of life support. This is in order to allow OneLegacy Foundation enough time to find recipients who will be a match.”

The heartbreaking news came one week after Us confirmed that Heche’s Mini Cooper ran off the road and into a house in Los Angeles on August 5 after she was allegedly speeding. Upon impact, the house went up in flames, which left the former soap opera actress with severe burns.

The Los Angeles Fire Department later reported that Heche was conscious when they arrived on the scene and as she was transported to a trauma center. However, things took a turn for the worse on Monday, August 8.

The Volcano actress suffered “a significant pulmonary injury requiring mechanical ventilation” following the accident, a representative for Heche told Us at the time. “She is in a coma and has not regained consciousness since shortly after the accident.”

The Six Days Seven Nights actress is survived by sons Homer and Atlas, 13. Heche welcomed Homer in March 2002, one year after marrying Laffoon, 48. The pair called it quits in 2006 and finalized their divorce the following year.

The Another World alum moved on with James Tupper and the pair welcomed their son, Atlas, in 2009. Us confirmed in January 2018 that Heche and Tupper, 57, split after more than a decade together.