Bye-bye, reality royalty! Andy Cohen weighed in on Jax Taylor and Brittany Cartwright’s Vanderpump Rules exit days after the couple announced they would not be returning next season.

“I gotta talk about Jax and Brittany. I just have to say, I have to give it up to them,” Cohen, 52, said on the Monday, December 7, episode of his SiriusXM Radio Andy show. “Have you seen a run on a — specifically Jax — like, Jax created so much story, drama, conversation in his eight years on that show. That’s quite a run that he had.”

The Bravo host added: “He will go down as one of the biggest, you know, reality stars in their moment, don’t you think? That was an incredible run that they had.” 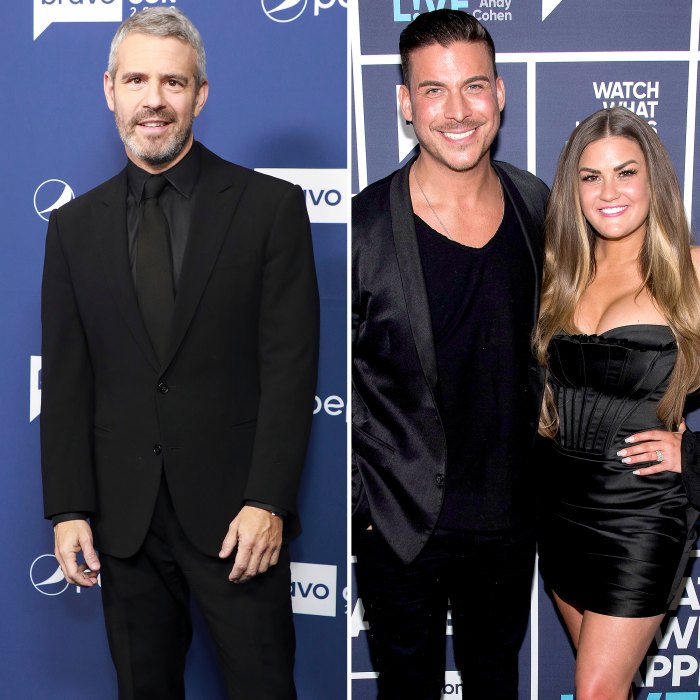 Cohen also explained that no matter how bad the drama surrounding Taylor, 41, got onscreen over the years, the reality star always appeared professional on his talk show, Watch What Happens Live With Andy Cohen.

“One thing that I always, always appreciated about Jax is, man, every time he came to Watch What Happens Live, he was always in the middle of some s–t storm on the show and we just would roast him mercilessly,” he said. “And he always took it like a man. He was a good sport.”

The St. Louis, Missouri, native continued: “He would come on Watch What Happens Live and he would be, like, ‘How mean are you going to be to me today?’ And I would be like, ‘It’s bad.’ There was always stuff that we were confronting him about and he took it.”

The couple, who are expecting their first child together, announced on Friday, December 4, that they would not be returning for season 9 of Vanderpump Rules.

“The last 8 years on Vanderpump Rules have been some of the most challenging, rewarding and fulfilling years of my life,” Taylor wrote via Instagram, noting it was “difficult to share” the pair’s step back from the show. “We are excited to take this time to focus on our growing family and share with you our new endeavors.”

The Michigan native teased future ventures, adding, “Stay tuned, We can’t wait to share what we have planned.”

Cartwright, 31, posted a similar statement on her Instagram account, sharing photos of her evolution over her past five years as a reality star.

The couple’s exit came in the wake of Bravo firing Stassi Schroeder and Kristen Doute from the show in June for their past actions toward former costar Faith Stowers. The pair wrongfully called the police on Stowers, 31, in 2018, identifying her as a possible criminal. Max Boyens and Brett Caprioni were also axed by the network for their past racist actions.

Everything We Know About ‘Vanderpump Rules’ Season 9 Read article

Taylor, who also accused Stowers of committing crimes in a 2017 tweet, was not let go at the time.

Despite the drastic change in stars for Vanderpump Rules in 2020, Cohen said on Monday that there is still a “solid cast” with pregnant Lala Kent and Scheana Shay as well as James Kennedy, Katie Maloney, Ariana Madix, Tom Sandoval and Tom Schwartz.

“When that show’s going to start shooting again, I have no idea, but I’m excited. I’m excited for there to be a shift,” he said.