Amy Schumer Hits Back After Being Blamed for Tampon Shortage

Wait, what? Amy Schumer is being blamed for a nationwide tampon shortage — and even she’s confused.

“Whoa I don’t even have a uterus,” the Life & Beth star, 41, captioned an Instagram screenshot of a headline about the story. The comedian, who shares 3-year-old son Gene with husband Chris Fischer, underwent a hysterectomy in September 2021 due to excessively painful periods caused by endometriosis.

Prior to her surgery, Schumer appeared in several ads for Tampax in 2020, including one in which she enlists the help of a gynecologist — and a donut! — to show viewers how to properly insert a tampon. After the doctor and the I Feel Pretty actress successfully insert the tampon into the dessert, Schumer takes a bite out of the donut. In another ad, she discusses which size tampon to use when, a spot that has been highly praised for breaking taboos around menstruation.

After Schumer’s series of commercials with the brand, “retail sales growth has exploded,” Proctor & Gamble spokeswoman Cheri McMaster told TIME in an article published on Tuesday, June 7. Per the outlet, “Demand is up 7.7% over the past two years, and the company is running its Auburn, Maine Tampax factory 24/7 to meet demand.”

Amy Schumer’s Most Controversial Moments Through the Years Read article

In reaction to the 2022 Oscars host’s response on Instagram, dozens of female celebrities chimed in with their two cents, laughing at the idea of Schumer causing a tampon shortage.

“What???????” commented Katie Couric in disbelief, while Kerry Washington quipped, “I knew it.” Padma Lakshmi replied, “LOL 😂.” Amber Tamblyn didn’t even use words in order to adequately express her thoughts. “😭😭😭😭😭,” she shared. 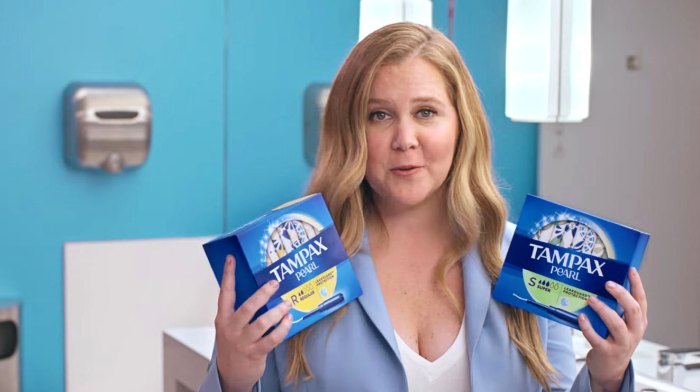 Others followed up with their own jokes. “I’ve been using hundreds of tampons a day to perform household tasks,” wrote one person. “I’m glad you’re taking the heat.” Another commented, “Lmao now you’re messing with supply chain 😂😂 what’s next? 🤣🤣🤣.”

Despite any blame coming her way, Schumer — who has also been candid about her decision to get liposuction after her hysterectomy — is all about loving her body this summer. Last month, she took to Instagram to share a photo of herself wearing a black corset one-piece.

“C section. Hysterectomy. Lipo. This summer is about letting the love in,” she captioned the post. “Trying to be healthy and strong for myself and my family. I want to feel hot too. In my prime. Let’s go. Who’s with me?”

Read More: Amy Schumer Hits Back After Being Blamed for Tampon Shortage